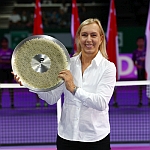 Though Navratilova tied Sánchez-Vicario and Austin when it came to matches won and lost, the American won the most games of the week, and nearly 60% of games won overall.

The fab four were joined in Singapore by two other WTA Ambassadors in Mary Piece and the recently retired Li Na, who assisted in various activities throughout the week that ranged from interacting with WTA Future Stars to speaking with local media about the state of the game. Asked about new CEO Steve Simon earlier in the week, Navratilova had this to say:

“I’m going to have dinner with Steve on Wednesday. I want to pick his brain and vice versa. I still think overall we see the number of injuries and withdrawals is still too high. You have to think long term. Maybe it’s great to have all these tournaments, but at the end of the day, if you don’t have enough players playing, you have a problem.

“So I still think for me it probably would be the length of the calendar that’s a long term project. I know Stacey Allaster has been working on that already. I was talking about that 30, 35 years ago. The season is too long. We played in December the season ending championship. So it’s better, but I think something still needs to be done.”