Posted by TennisNews.com on January 9, 2016 in Headline, Tournament News 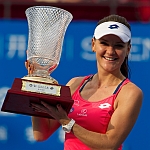 Tradition prevailed at the 2016 Shenzhen Open, the first seed lifting the singles trophy for the fourth year of the tournament’s four-year existence: Agnieszka Radwanska crowned the 2016 singles champion after a 6-3, 6-2 win over American Alison Riske, a contest brimming with thrilling rallies swelling up into tense games.

Fans ringed the stadium as she withstood an aggressive Riske, who went toe-to-toe with Radwanska until she got broken at 3-4 in the first set. After nearly 40 minutes of play, Radwanska served out the first set.

With Riske facing one of the best players in the world — Radwanska the winner of the 2015 WTA Finals — the American clearly adopted a go-for-broke strategy, determined to use every inch of the court and fire for the lines with astonishing aplomb. Riske was able to disguise her shots well, hitting surprising changes of direction that caught Radwanska flat-footed, enabling her to threaten Radwanska’s serve — even orchestrating two break points, though she couldn’t convert — Radwanska’s favorite way to hold was by punctuating the game with one or more emphatic aces, ultimately riding nine aces to victory.

Serving to open the second set, the resolute Riske fended off three breakpoints for a critical hold, melting a dropshot from no-man’s land to get her on the board right away. However, with the inevitable flip side of Riske’s aggressive play — just barely enough errors creeping in at costly moments to give her opponent three breaks to her none — Radwanska was able to ride out her onslaught. Serving at 2-all, Riske fell into a 0-30 hole when she offered two groundstroke errors — which she responded to by unleashing an ace out wide and then ripping a forehand winner from midcourt to level the game at 30-all. Radwanska, elevating her game at the critical moment as all champions do, cracked a forehand return up the line for a winner — lingering a moment longer than needed to also deliver a long steely look across the net — her own intensity evident. On breakpoint, Radwanska again took her return for a winner, this time off her backhand wing to brush the outside of the sideline. She repeated this pattern with Riske serving at 2-4 to capture her second break, stepping in on a second serve to snap another forehand winner down the line.

In Radwanska’s final service game, Riske erased two championship points — charging into net on one, stepping into the court and smashing a forehand up the line past Radwanska on the second — but on her opponent’s third championship point, Radwanska hit a service winner up the T to claim her 18th WTA title.

“She was really playing solid tennis today,” Radwanska said. “Maybe the score looks easier than it was out on the court. Very persistent quality from the baseline, and I was really in trouble, actually. My serve really helped me a lot. I was struggling at the baseline —  I couldn’t really do that much. But my serve helped me for sure, and on the deciding points I was a little bit better — and that’s why it went well for me,” Radwanska said.

“Against Radwanska you have to be aggressive,” Riske explained, her last name a fitting epitome of her philosophy. “She can play all day and she’s a fantastic player. I stuck to being aggressive as best I could. Obviously, it’s a little bit higher risk, but it was my opportunity to give myself the best chance to win. It was a tough match, but it was a great week for me and I look forward to playing again in Melbourne.”

Radwanska’s win here extends a considerable hot streak that began after the 2015 US Open with the Asian swing — Radwanska has now won 22 of her last 26 matches, helping her to raise trophies at the Toray Pan Pacific Open, Tianjin Open, the 2015 WTA Finals, and now the 2016 Shenzhen Open. With today’s win, she tallied her 18th WTA title — nine of which have come in Asia — and rides a wave of momentum leading up to the Australian Open into Sydney.

“Asia is my favorite place to play,” Radwanska confirmed after the match. “In Asia, I play my best tennis. I feel really good on the court here, I like the courts and the atmosphere, and that’s why I have such good results. I just hope there can be more tournaments in China so I can play here more!”

When the WTA Rankings are released on Monday, Radwanska is expected to pass Maria Sharapova, who had to withdraw from Brisbane this week with a forearm injury, to seize the No. 4 ranking. The jump from No. 5 to No. 4 is significant — Monday’s rankings will be used to determine the seeds for the Australian Open — and will elevate Radwanska to her own quarter of the draw.

In doubles action, Monica Niculescu and Vania King defeated the first seeded team, ZHENG Saisai and XU Yi-Fan, in a closely contested match 6-1, 6-4 to capture the 2016 Shenzhen Open doubles crown — a first for King, but Niculescu’s second in Shenzhen, after winning with Klara Zakopalova in 2014.

The first set tipped quickly in Niculescu and King’s favor, and they struck first in the second set, breaking Xu’s serve at 2-all when Zheng netted a volley. After the Chinese team consulted with their coach on the changeover, they were able to break Niculescu right back at love with a stunning trifecta of winners off Zheng’s racket. However, Niculescu and King returned the favor, drawing errors from their opponents with their aggressive play to go up a break that they would not relinquish. Though Zheng and Xu did manage to force Niculescu to serve out the match by denying their

Niculescu was giddy after their championship win. “I always like coming here. I’m so happy we won the doubles. We won! It felt amazing. This is amazing! I want to congratulate the girls, they played very good — it was a tough match and it could have gone either way.”

King agreed, herself a former Grand Slam doubles champion now on the comeback trail after a herniated disc sidelined her for 2015. “The score line didn’t show it, but the points were very tough, the games were very tough. There were a lot of deuces. The biggest thing is that we came out on top on a lot of the deuce games. Both Monica and I played really well today. They’re not an easy team to play — they’re a very good team — we were just a little bit more aggressive, honestly, and I think that was the key. That doesn’t always pay off, but it paid off today.”

According to Zheng, “The other team really played up to their full potential very well, whereas we really didn’t — overall, we didn’t play up to our full capability in areas we’re usually quite good at. For instance, at the net, there were a few balls we didn’t put away —and so a lot of the time, they were the ones to put it away instead.”

Even with her defeat in the finals fresh, Zheng was still quick to praise the tournament. “I really enjoy this place. I feel like everything is comfortable here. The tournament is great, and the staff. Every year is the same, and — actually, every year something improves! So I like to come back here every year.”

Likewise, when Niculescu was asked if she would return next year, she said, “I’m here every year, so count on this!”

Radwanska too had high praise for the 2016 Shenzhen Open, even before she had lifted the trophy: “I’m very happy to be here for the first time. I can really see that it’s a lovely city and a very nice site,” she said on Thursday after her quarterfinal match. “So many courts, a lot better for us to practice whenever we can, and the tournament is very well-organized. I cannot complain about anything — I really like the hotel as well. Every tennis tournament should be like that.”