Posted by TennisNews.com on March 18, 2016 in Tennis News 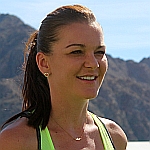 The resurgent Agneiszka Radwanska has followed up on her title winning performance at last October’s WTA Finals in Singapore and is now guaranteed to move back up to the WTA’s world no. 2 ranking after reaching the BNP Paribas Open semi-finals in Indian Wells.

Radwanksa’s 6-2, 7-6 defeat of two times Wimbledon champion Petra Kvitova earned sufficient points to take the 27 year-old Pole above Australian Open champion Angelique Kerber who has struggled to back up her success in Melbourne.

She was last ranked no.2 in early July, 2012 after reaching the Wimbledon final where she was beaten by current no.1 Serena Williams.

And Radwanska credited a long and revitalizing rest after her triumph last October for providing her with the energy to this year reach three semi-finals, including at the Australian Open and win the title in Shenzen.

“The off-season is a big break and I’m just so happy that I could just stay in the same level, playing the same good tennis I was playing,” said Radwanksa who slipped down to 15th place in the rankings two-thirds of the way through last year and was seeded in that position at the US Open.

She admitted to doing very little after returning home after Singapore and added: “Sometimes we are all thinking more is better, but it’s not true, really. I have a really good rest, didn’t do anything throughout three weeks, and then I started very slow. This is the fourth tournament this year and I’m playing so good, so I guess the plan was fine.”

Now Radwanska is confident of holding second position through the next two majors at the French Open and Wimbledon. “It’s always a good feeling to be back in this position,” she said. “And now I have the opportunity that I’m definitely not really defending much points until the grass.”