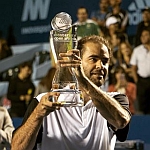 Pete Sampras is the champion at the inaugural Monterrey Open after downing countryman John McEnroe 6-3, 7-6(2) on Thursday. He joins Thomas Enqvist at the top of the ATP Champions Tour rankings on 700 points.

After breaking for 5-3 and claiming the opening set a game later, Sampras would survive a stern test from McEnroe in the second. The 44-year-old relinquished an early break lead, only to stave off five set points while serving to stay in the set at 5-6. He would reel off nine of the last 11 points to close out the match after one hour and 23 minutes.

“It is always a pleasure playing John, he was one my idols as a kid,” said Sampras. “He’s 56. To play at this level is very impressive. To be out there and be competitive, to be able to move the way he does and the shots he can hit. Monterrey was fantastic. The crowd was great, very enthusiastic and very positive.

“I hope to be an inspiration. Hopefully some kids will be inspired to play tennis. Even though we are not in our prime, we are still playing pretty well. John and I being here is a start to hopefully getting tennis a little bit more mainstream in Mexico.”

Sampras, who finished runner-up to Xavier Malisse in the Knokke-Heist final in August, fired 11 aces and saved eight of nine break points in total in Thursday’s title match. He prevailed despite McEnroe winning 81 per cent of first serve points.

“Pete is the toughest player I´ve ever played,” said McEnroe. “Whenever we play in front of crowds that fire us up, we want to play for those type of people.”

Meanwhile, in the third-place match, an all-Swedish affair between Mats Wilander and Thomas Enqvist went to the 41-year-old Stockholm native Enqvist, 6-4, 6-4.

Both competitors were standard bearers for Sweden for many years and Wilander was eager to discuss the rising crop of teens from his country – the Ymer brothers.

“Elias (World No.131, age 19 ) is not playing the upcoming Davis Cup match for Sweden against Denmark. It’s unfortunate for him, but Mikael (ranked 620, age 17)  is getting a chance to play. I think the cool thing is that there is a younger brother that can fill the footsteps of his bigger brother. In many ways, I think they will help each other out by taking pressure away from one another because the truth is, they are the lone hopes in Sweden right now. They are who we are hoping for because they are so special, interesting and inspiring for a country like Sweden, with their parents coming from Africa. Of course we need to let immigrants into our society and we just have to figure out a way to make it work. They would be the perfect story.”