Posted by TennisNews.com on December 28, 2015 in Tennis News 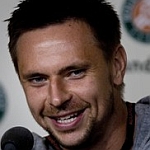 Swede Robin Soderling announced his retirement from tennis more than four years after his last match due to the effects of glandular fever. The first man of only two men to defeat Rafael Nadal at the French Open (in the 2009 fourth round; Novak Djokovic also did it in last summer’s quarter-finals, last played a match in July, 2011 after coming down with his illness.

“I have realized that I will not be fit enough to play tennis at the level I demand of myself,” Soderling, 31, told Swedish news agency TT. “Although my career as a tennis player is over I still have a bright  future ahead of me and my schedule for the next few years is full,” said Soderling, winner of 10 titles and currently working with the Stockholm Open ATP event.

Soderling played Roland Garros final reached the finals in 2009 (loss to Roger Federer) and 2010 (loss to Nadal) and stood fourth in the rankings in 2010. During recent years, Soderling married, with his wife giving birth to the couple’s child several years ago.