“Nadal Will Stick With Uncle Toni As Coach,” So Says Moya

“Nadal Will Stick With Uncle Toni As Coach,” So Says Moya
February 1, 2016
Notice: Undefined variable: page_title in /home/tennisne/public_html/wp-content/themes/dante-child/single.php on line 205

Posted by TennisNews.com on February 1, 2016 in Tennis News 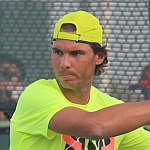 From a decades-long friendship with Rafael Nadal, former Spanish great Carlos Moya is well-acquainted with the thinking process of his younger compatriot, a fellow former No. 1. For that reason Moya, now coaching Canadian Milos Raonic, remains convinced that Nadal will stick with his uncle and lifetime coach Toni Nadal until the end of his career.

Moya, 39, was a mentor back in the day for Nadal, a decade his junior, with both men growing up and learning their tennis on the island of Mallorca.

In the wake of Nadal’s first-round Australian Open exit against compatriot Fernando Verdasco, speculation is mounting that the 14-time grand slam event winner should be thinking about parting company on a professional basis with his relative.

But that’s not how Moya sees things, telling l’Equipe: “I’m convinced Rafa will end his career with Toni and with the same team that’s been around him for years. I know Rafa well and I think he’d think it unfair to separate himself from Toni because things aren’t going so well.”

Before starting with Team Raonic only weeks ago, Moya had been mentioned in conversation as a possible new Nadal coach, a move he has always denied: “I’ve never looked to be a part of his team. We’re good friends, we often eat together, and we trained together at Christmas. That’s all.

“Rafael is not yet 30, he needs to improve in certain areas and he knows that. He works. It’s a normal process: first of all, you try the new things in practice, and then you apply them in a match, under pressure, and then you don’t think about them anymore.”

Nadal spent 2015 trying to recover after a disaster 2014; his Melbourne loss to Verdasco may have set him back as he tries to regroup for a morale-building trip to clay South American events in February.