Posted by TennisNews.com on February 9, 2016 in Business News 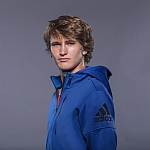 Adidas has taken another step towards rebuilding its presence in the men’s game, signing up teenager Alexander Zverev to wear its clothing and shoes.

The 19-year-old from Germany had come up through the ranks wearing Nike, but will now represent a clothing company with which he has a national tie.

“I’m super happy to now have the professional support of adidas during this next important phase in my career. They not only have a long history of product innovation and success in tennis, but also sports in general and their German heritage will be a great dimension in our partnership,” Zverev said in a statement.

The No. 78 will wear both adidas clothing and shoes, and will be the lead figure of one popular, long-running range.

Zverev is one of the youngest players in the top 100, and an investment for adidas following their reduced presence at the top of the ATP recently. The company went through a period where its clothing did not have any consistent presence in the top 10 until it signed Tomas Berdych at the beginning of this season. Berdych was previously with H&M.

“We are excited to welcome Alexander as the newest member of the adidas tennis family,” said tennis marketing chief Andrea Swick. “His youth, positive energy and aggressive game fit perfectly with our mission to partner with ‘creators’ in the world of sport. We look forward to a long partnership together as he makes his way to the top.”

The company is coming off a successful Australian Open, which saw Novak Djokovic win the men’s title wearing its shoes and the women’s title won by adidas-sponsored Angelique Kerber. Jo-Wilfried Tsonga has also climbed back into the top 10.

It has also launched a new sports campaign titled “Here to create” which features Caroline Wozniacki among those appearing in advertisements.