Posted by TennisNews.com on February 15, 2016 in Tournament News 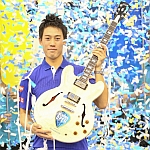 The match immediately played into the hands of Fritz, with him winning twelve of the first thirteen points of the set. It would seem that the power of Fritz was making the three-time champ over shoot his targets on the court.

Originally off on his timing, Nishikori quickly made the adjustment and a change of momentum occurred with a break of the Fritz serve at 3-1. With the set leveled back at 4-4, Nishikori broke the young American once more to serve out the first, 6-4.

Fritz continued to play with fire in the second set down 0-40 in service games and having to rely on his big serve to keep him from getting broken again.  Up 2-1, Fritz began to go back to his original game plan, overpowering Nishikori off the court.

The strategy was going accordingly until Fritz squandered four break point opportunities. Returning the favor, and not relishing in the moment, Nishikori went on to break Fritz the next game.

The poise and demeanor the 18-year-old displayed so well throughout the week was slowly diminishing as frustration set in. Unable to recover from the break of serve, Fritz managed to fight off two match points on his serve, but eventually fell on the third chance by Nishikori, 6-4, 6-4.

“I had a slow start, but after that I served really well and saved a couple of break points,” Nishikori said. “We have played many practice matches and it helped for sure. I had never beat him before, so I was really nervous today.”

Nishikori joins Jimmy Connors as only the second player in tournament history to win four titles in Memphis. He also becomes the fourth active player to four-peat at a tournament.

“It is not everyday that you can comeback to the same tournament, and win it again, especially with such great players in the draw,” Gonzalez said.

“We have never lost here, so it is really nice,” Fyrstenberg added. “Last year we both dealt with a few injuries and hopefully we can now remain injury free and go for a better ranking.”

The defending champions are now 22-14 lifetime on the ATP Word Tour, 2-2 in finals.