Posted by TennisNews.com on March 29, 2016 in Junior News 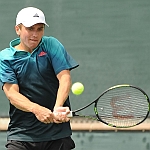 University of Georgia-bound Nathan Ponwith from Scottsdale, Ariz., battled fierce winds and cold conditions on the first day of main-draw play at the 12th Annual USTA International Spring Championships, as he opened with a straight-set win on Monday.

Play was delayed a little more than two hours because of wet courts from a light early-morning rain on a busy day of the boys’ and girls’ ITF 16s and 18s event, an ITF Level 1 tournament being played at StubHub Center, home of the USTA Training Center – West.

The top seeds held true to form, but not without a little struggle on the boys’ side as top-seeded Ulises Blanch of Pompano Beach, Fla, the International Tennis Federation’s No. 9-ranked player in the world, defeated Tristan McCormick of Berwyn, Pa., 4-6, 6-3, 6-3. On the girls’ side, No. 1 Amanda Anisimova, the No. 11 ITF-ranked junior from Hallandale Beach, Fla., got past Paris Corley from Grants, N.M., 6-4, 6-1.

The No. 3-seeded, 17-year-old Ponwith battled the 40 mph gusts of wind and turned away Jason Legall of Palm Coast, Fla., 6-4, 6-1. “It was very windy and picked up later in the first set,” said Ponwith, who will earn his high school diploma after this semester from Connections Academy Online School before traveling to Athens, Ga., in the fall. “I’m not really used to wind in the desert. I don’t think you could ever really get used to it; it was so windy.”

Tournament Director John Lansville said the forecast looked favorable and skies should be clear and sunny for the weekend finals.

Last year, Ponwith was eliminated in the ISC semifinals by eventual winner and this year’s No. 2 seeded William Blumberg. A week later, Ponwith fell again in the semifinals at the ASICS Easter Bowl losing to winner Taylor Fritz.

“At least I’m losing to the right people,” said Ponwith, who lost to Frances Tiafoe in the 2014 ASICS Easter Bowl final and could face Blumberg again in this year’s Carson semifinals if both keep winning. “The draw is just as strong this year as last year.”

The top two seeds in the boys’ 16s Govind Nanda and Axel Nefve and the top two in the girls’ 16s, Kacie Harvey and Marcella Cruz, will be in action on Tuesday.