Posted by TennisNews.com on April 9, 2016 in Junior News 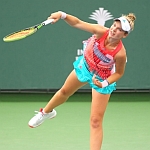 The young ASICS Easter Bowl Giant Slayer was at it again on Friday as Cincinnati’s Caty McNally shocked the top-seeded player in the ITF girls’ singles division for the second straight year.

“I don’t know, I just love it here,” said the No. 9-seeded McNally after her 6-4, 6-4 win over No. 1 Maria Mateas of Braintree, Mass. “And when I play the top-seeded player, or anybody, I just try to play like there’s nothing to lose and there’s no pressure. I just seem to stay very focused when I play the top players.”

Caty McNally was happy to escape the match just minutes ahead of a downpour that led to a nearly three-hour rain delay. “When the lines were getting slippery I was just like, ‘Oh, no. I do not want to stop. I’m playing too well,’ ” she said.

Caty’s Brother John said the decision for both players to skip Carson and focus on the ASICS Easter Bowl has been a good one. “We both had long trips to South America so I think the rest has helped,” he said. “It was nice to get that extra training on the hard courts again after coming off the clay. That transition from hard courts to clay is difficult so it was definitely better to get that rest and training. And we’re both playing pretty solid tennis so it’s definitely worked.”

John said he and his sister are taking a professional approach this week. “It’s just another day at the office,” he said. “We don’t go back to the hotel and talk about it. I mean, obviously it’s more fun to win and everyone is a little happier at dinner and back at the hotel, but we are just trying to take it one match at a time.”

Caty will face No. 13-seed Ellie Douglas in one semifinal starting at 10 a.m., on Saturday while No. 8 Alexandra Sanford will meet unseeded Hanna Chang at the same time. John McNally, the No. 4-seeded player, will take on No. 6 Vasil Kirkov in a match to follow.

Top-seeded in doubles with his Cincinnati partner J.J. Wolf, John teamed with Wolf to reach the doubles semifinals, while Caty fell in her quarterfinal doubles.
Both Caty and John are being coached this week by mother Lynn Nabors-McNally. A renowned junior coach in Cincinnati, Lynn is a member of the Cincinnati Tennis Hall of Fame and played at Northwestern University and on the pro tour.

In the boys’ 16s singles final, top-seeded Carson Haskins of Ballwin, Mo., forced a third set right before the rains came, and then returned three hours later to beat a game opponent in No. 11 Lukas Greif of Evansville, Ind., 4-6, 6-3, 6-1.

“First thing I did was to get stretched out and make sure I was loose,” said Haskins. “Then, I got something to eat because I wasn’t able to eat with all that was going on.”

Haskins, who has trained at the Miller Tennis Academy in Chesterfield, Mo., since he started playing tennis seven years ago at age 9, still plays high school tennis. “I go home and then I think I have a match on Monday,” he said.

“It’s weird now being on that list,” he said. “Two years ago I was here playing in the 14s and watched Zeke Clark playing John McNally in the 16s final. I was watching it and remember thinking, ‘God, these players are so good.’ I was in the 14s and I won a couple rounds and I was feeling pretty good. But if you would have told me then that I would be winning this tournament now, I would have been like, ‘You’re crazy.’ ”

Greif is 16 and trains at the Smith Academy in Indianapolis. “It was very tough in between, just all the thoughts and thinking about the third set,” said Greif of the rain delay. “He just came out better, came out hitting some unbelievable shots down the stretch on important points, and that’s what did it. It was a really good week for me. It’s going to help my confidence and my game.”

Blake owns a 3-0 record now against Forbes, who she beat in a super tiebreaker for fifth place at the USTA Winternationals to start the year. Blake trains at the Saviano Tennis in Florida. “I had a great time playing in the final against a good friend,” Blake said. “I’ll look forward to coming back doing it again next year.”

Like Blake, Forbes admitted to battling some nerves from the outset. “I was a little jittery at the start, a few butterflies,” said Forbes, who trains at N.C. State at the Jon Choboy Tennis Academy. “I was definitely playing great tennis. I was just trying to move forward.”