Posted by TennisNews.com on May 15, 2016 in Tournament News 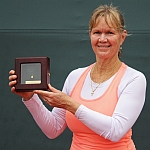 Former touring professional Ros Nideffer of San Diego continued her dominating play in the 50s singles division of the USTA National Women’s 50-90 Hard Court Championships as she won her third straight title and fourth championship in the last five years on Saturday at the La Jolla Beach & Tennis Club.

On a cool and cloudy day, the 55-year-old Nideffer fended off a strong challenge in the singles final against Nathalie Herreman-Bagby, a 50-year-old from Pacific Palisades, Calif., who also played on the women’s professional tennis tour. Nideffer won a hard-fought 3-6, 6-4, 6-1 victory, which took two hours and 35 minutes.

Nideffer experienced early-match nerves and a spate of unforced errors as she fell behind 4-0 early in the first set.  However, she began to relax and find her rhythm as she won three of the next four games. Despite losing the first set 6-3, when she dropped her serve in the ninth game, the momentum of the match began to switch in Nideffer’s favor.

At 4-4 in the second set, Nideffer won eight straight points, breaking Herreman-Bagby’s serve at love and then held her own serve at love to win the set 6-4 and level the match at one-set all. In the third set, Nideffer took control and used three service breaks to take a 5-0 lead and went on to close out the set and match 6-1.

Nideffer attributed her slow start in the early stages of the match to problems with her serve. “It made me nervous and it started to worry me. That put more pressure on the rest of my game. I was spraying balls and missing shots,” she said. “I knew if I could pull myself together, I could get back into the match.”

When asked about how she felt winning the tournament title for the third consecutive year, Nideffer responded, “It’s kind of a shock to look at it that way. It’s nice to have that record. It’s satisfying.”

Saturday’s 50s singles final marked the first time in 23 years Nideffer and Herreman-Bagby, a native of France, played against each other. During their days as touring professionals on the Women’s Tennis Association circuit in the 1980s and 1990s, they split six head-to-head career meetings. Their last meeting on the WTA tour was in 1993 in Carlsbad, Calif.

In other tournament action, top-seeded Tina Karwasky of Glendale, Calif., successfully defended her singles title in the 60s division, as she defeated second-seeded Carolyn Nichols of Rancho Santa Fe, Calif., in the final 6-3, 6-4 in one-hour and 33 minutes.

In the 70s singles championship, top-seeded Brenda Carter of Charleston, S.C., played a near flawless match as she breezed past second-seeded Betty Wachob of Panama City, Fla., 6-1, 6-0.