Posted by TennisNews.com on October 3, 2015 in Tournament News 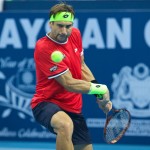 For the second time in the tournament’s seven year history, the top two seeds are set for a showdown in the final of the Malaysian Open, Kuala Lumpur 2015 held here at the Putra Stadium at Bukit Jalil.

The two-time Malaysian Open semifinalist had his serve broken twice in the opening set, but crucially saved all six break opportunities against him in the next two sets to advance into his fourth final of the year (won all three at Acapulco, Rio de Janeiro and Doha).

“I feel happy because it’s my first final here after many times of coming. Benjamin played great in the first set so in the second set I tried to change my tactics, my forehand and importantly, I could win. Feliciano is a very good friend and a great player. Every time I play with Feliciano, I know it’s going to be a tough match. Tomorrow I have to improve my game against him,” said Ferrer, who has an 8-6 win/loss record against Lopez.

Second seed Lopez proved one hurdle too many for the in-form Nick Kyrgios, with the 34-year-old Spaniard defeating the 20-year-old Aussie 7-6(2), 7-6(5) in a closely contested match lasting 84 minutes.

The duo exchanged breaks in the first set, the first time Kyrgios’s serve was broken this tournament, but in the end it was down to the tie-breaks, where the Aussie simply could not compete against a Lopez who was in exquisite serving form (hit 12 aces and won 85% of first serve points).

World No. 17 Lopez will play in his 13th career final on Sunday, his second of the year (l. to Estrella Burgos in Quito), as he guns for his fifth career title.

“The match was so close. It could have gone either way. He played really good also. I have to be proud of the way I played because he was really playing well. When I played here in the past I didn’t play my best so I really wanted to do better this time and I made it. I am very happy; it has been a good week of tennis for me. I’m playing better now than I did in February when I played the final in Quito,” Lopez said.

Despite his defeat, Kyrgios, who has a Malaysian mother, can take heart from making the second semifinal of his career and playing some of his best tennis this week in front of a crowd that considers him one of their own.

“He served unbelievably throughout the match. That’s why he’s one of the best players in the world. His serve kept him in the match. His volleys were unbelievable. I was impressed with him today. (But) I’m really happy with my performance this week. I’m really close to hitting the top 30 so that’s my (next) goal,” Kyrgios said.

The doubles finals will be played on Centre Court this Sunday at 2.15pm, with the singles final expected to commence not before 4.30pm.