Posted by TennisNews.com on November 11, 2016 in Tournament News 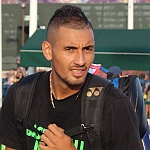 Two of the hottest players on tour, Nick Kyrgios and Tomas Berdych, plus tennis legend Goran Ivanisevic are confirmed to star at this summer’s World Tennis Challenge from 10 to 12 January 2017 at Memorial Drive, Adelaide.

Led by one of the most successful pairings in history, Bob and Mike Bryan, the World Tennis Challenge will feature men’s doubles for the first time along with a singles and a legends match each night.

The field will be boosted to twelve players spread across three teams.

World No.13 Kyrgios has had his best results this year winning three singles titles in Marseille, Atlanta and Tokyo, the first Australian to win three or more titles in a season since South Australian Lleyton Hewitt won four in 2004.

Kyrgios is looking forward to making his debut in Adelaide.

“My good friend Thanasi [Kokkinakis] and our [Davis Cup] captain Lleyton [Hewitt] are from there and they say it’s a great place to play and compete.

“The field so far is pretty strong. I can’t wait to see which legend I team up with.

“It’s such a unique event, playing with both a dubs pairing and a legend will be a lot of fun.

“For me, Adelaide will be another chance to prepare for the Australian Open,” Kyrgios added.

Berdych is one of the most consistent players on the men’s tour and looks to finish his seventh consecutive season inside the top 10.

The Czech star was last in Adelaide for an exhibition match against Hewitt in 2015.

“I’ve been to Adelaide a few times and I’m looking forward to playing at my first World Tennis Challenge,” Berdych said.

“The tournament is a fun, relaxed way to secure some quality match practice ahead of the Australian Open and I’m happy to be a part of it.”

The former world No.2 is the only men’s player to win Wimbledon as a wildcard. He heads up the legends line-up for 2017.

“We are thrilled with the way the line-up is coming together for 2017. To have two top 15 players as well as one of the most successful doubles pairings in the sport is a great coup for South Australian tennis fans.”

Assistant Minister to the Premier Katrine Hildyard added, “South Australians have a passion for tennis, with a track record of producing champions.

“Every year the event gets better and better, and this year fans are in for a treat with the likes of Australia’s Nick Kyrgios and international stars Tomas Berdych and the Bryan brothers picking up their racquets.

“Our state has a strong reputation for hosting major events and visitors can look forward to another world-class experience at the World Tennis Challenge. With Memorial Drive in the city centre and so much within easy reach of Adelaide, fans will also be able to explore South Australia’s many attractions.

“The South Australian Tourism Commission, through Events South Australia, is proud to have supported the World Tennis Challenge since it began in 2009.”

Further players and the schedule of play will be announced in the coming weeks.