Posted by TennisNews.com on October 28, 2015 in Business News 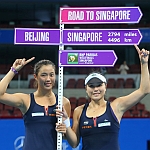 The Women’s Tennis Association (WTA) and Lagardère Sports announced today that more fans are traveling to Singapore to watch the tournament this year. Consumer data shows an increase of over 30% in the number of fans traveling from overseas.

For Ann Eley, making the 20-hour trek from the United Kingdom to Singapore didn’t seem daunting at all.  Eley is one of over 2,000 fans that have made the trip to the BNP Paribas WTA Finals Singapore presented by SC Global so far this year in just the first two days of the tournament.

“I really enjoy coming here because I get to see all the best players in the world play one another in the round robin,” Eley said. “Knowing the Finals are on the other end of that travel, that makes it all well worth it for me.”

After the WTA Finals’ initial year in Singapore, the increased numbers paint this picture: The event has become a destination for hardcore tennis fans from around the world, including for those who cheer for the likes of Sania Mirza, Simona Halep, Flavia Pennetta and more.

A massive 374% increase in fans traveling from India have made the trip to watch Mirza in her attempt to hoist a second WTA Finals trophy in two years.  Mirza, the top seed in doubles alongside the legendary Martina Hingis, has become an even bigger star in India and around the world this year. She is defending champion at the WTA Finals (having won here last year with Cara Black) and enjoys a traveling cadre of support, both from local Indian residents and as the numbers have shown, her home country itself.

Attendees from Romania are up 54 percent as Halep, one of the most famous athletes and celebrities in that country, has grown her legion of vocal fans that shout out “Si-mo-na!” at each of her matches.

“I really want to thank them,” Halep has said of her globetrotting fans earlier this year. “It’s amazing that they can come to support me. I see the love, you know. I see that they like watching me playing and they like to say that they are Romanians. That’s nice for me.”

Italian support has ticked up for Pennetta, the US Open champion, who is making her final appearance in a WTA event before retiring. Fans traveling from Italy are up 139 percent in comparison with 2014.

The Asia Pacific region has taken notice of the WTA Finals as well, as fans traveling from China are up 42 percent from last year.

Will the WTA Finals and its fans continue to expand globally in years to come? If fans like Ann Eley are any indication, then yes. Singapore will play host to the event at least through 2018, offering itself as an end-of-the-year benchmark for the top eight, and a destination for tennis lovers around the world.