Posted by TennisNews.com on October 31, 2015 in Tournament News 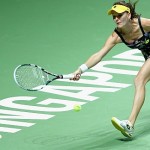 Agnieszka Radwanska outdid Garbiñe Muguruza in a marathon to reach the final of the BNP Paribas WTA Finals Singapore presented by SC Global. It was her 50th win of the year.Watch highlights, interviews and much more video from Singapore right here on wtatennis.com!

Muguruza has been somewhat of a nemesis for Radwanska. She’d won all four of their other meetings this year, at Sydney, Dubai, Wimbledon and Beijing, and it looked like that pattern was going to continue in Singapore on Saturday as she dug out of a 4-1 hole to sneak out the first set tie-break.

But Radwanska went right to work from there, hitting the corners with her pinpoint groundstrokes more and more and capitalizing on the unforced errors that began creeping into Muguruza’s game, and after two hours and 38 minutes – and some tense moments as she watched a 4-1 third set lead dissipate to 4-all – the No.5-seeded Pole finally got the better of the No.2-seeded Spaniard, 6-7(5), 6-3, 7-5.

Radwanska, who finished the match with 29 winners to 24 unforced errors, was visibly emotional afterwards, and those tears of joy continued as she spoke to the fans in her on-court interview.

“I have no words to say really,” Radwanska said as the adoring crowd cheered her on.

“I didn’t know if I could come back after that first set, but I think it was a great match from the beginning until the end, so many rallies and a lot of running. I’m just so glad I could win this match in the end.

“After two losses in the beginning I thought it was kind of over for me here. Then I was just cheering for Maria, and she did a good job helping me get to the semifinal. I hope I can keep going now.”

The win brought Radwanska a pair of milestones – not only did she reach 50 match wins on the year, something only Serena Williams and Angelique Kerber have achieved this year, but the World No.6 also assured herself of passing $20 million in career prize money once the tournament is over.

She’s now also a win away from the biggest WTA title of her career, having never won one of the five biggest tournaments on the WTA calendar (the four Grand Slams and the WTA Finals). Her biggest titles so far in her career are two Premier Mandatory-level titles, at Beijing in 2011 and Miami in 2012.