Posted by TennisNews.com on November 22, 2015 in Tennis News 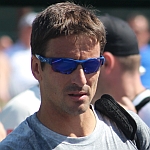 Two Spanish veterans have signed new coaches for next season. Tommy Robredo has joined with Oscar Serrano, while Fernando Verdasco will work with David Sanchez.

The two are among several Spanish players changing coaches, both choosing experienced names as they look to keep playing high-level tennis into the thirties.

Sanchez was previously the coach of Pablo Andujar, reaching No. 41 during his career and winning two titles. Serrano, who retired a year ago, reached No. 128.

Both Verdasco, 32, and Robredo, 33, slipped in the rankings this season. Robredo, who had injuries, is now ranked No. 42. Verdasco, who went 24-26 in matches, is ranked No. 49. They are the sixth- and seventh-highest Spanish players.

Marcel Granollers, however is still looking for a coach.