Rasheed Would Love To Coach Kyrgios

Posted by TennisNews.com on December 8, 2015 in Tennis News 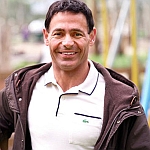 Journeyman Australian coach Roger Rasheed, off of the ATP since splitting with Grigor Dimitro in mid-2015, would be keen to have a crack at guiding Nick Kyrgios if the opportunity arose. The Adelaide coach is known as a disciplinarian and self-styled motivator who has been through the ranks of ATP clients.

Rasheed has worked at various times with Frenchman Jo-Wilfried Tsonga and Gael Monfils as well as guiding the younger Lleyton Hewitt back in the day.

“If a player with a high skill set is willing to commit and wants to be a [top] player in the game, my coaching process delivers,” Rasheed told the Sydney Morning Herald with reference to Kyrgios.

“You’ve got to be willing to buy into that, buy into actually wanting to be a great player.

“Obviously Nick’s a different character. He’s flamboyant, and you’re never going to take away the natural flair of the athlete. But it’s about how you can actually bring that and mold that into a product that can legitimately. . .  be a force on the world stage.”

No. 30 Kyrgios has been without guidance since before Wimbledon during what became the worst year of his career. The 20-year-old is now labeled as the bad boy of the ATP after his major run-in last August with Stan Wawrinka on court in Canada and other incidents including a lack of meaningful effort during a Wimbledon loss to Richard Gasquet.

His lone noticeable result since Wimbledon was a semi-final in Kuala Lumpur; he is currently collecting a paycheck from the IPTL exhibition league now on show in Asia.

Hewitt, Australia’s new Davis Cup captain, put in a few weeks over the summer as informal coach of Kyrgios but has said he will not be working under any special arrangement with the controversial player.

“I’m a mentor to all those (Davis Cup) guys and I’ll be helping them all,” he told Australian media, adding:  “I get on really well with Nick. He knows I’ve got his back.”