Posted by TennisNews.com on December 16, 2015 in Business News 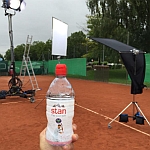 It will use Wawrinka in social media campaigns and also put him on its water bottles. The French-bottled water company has prestigious ties in tennis, sponsoring Wimbledon, the French Open and Maria Sharapova.

Previously, Wawrinka had re-signed with Yonex, getting $5 million annually in what was the biggest endorsement ever for the racket maker. Another international endorser is watch company Audemars Piguet. He is also sponsored by Subaru in Switzerland, as well as local companies like his regional bank, but is now getting more global offers.

The new agreement will help increase Wawrinka’s position among the highest earning players, where he is currently in ninth with endorsements of $7.5 million.