Posted by TennisNews.com on December 27, 2015 in Tournament News 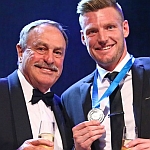 Newcombe Medal winner Sam Groth (Vic) will return home to kickstart his 2016 season, with the NSW born and bred 28-year-old granted a wildcard into the Apia International Sydney.

Groth enjoyed a breakout season in 2015 which saw him reach the third round of both the Australian Open and Wimbledon, where he faced Roger Federer on centre court, and play a major role in Australia’s Davis Cup comeback win over Kazakhstan in Darwin.

He capped his stellar year with the ultimate reward, receiving Australian Tennis’s top prize, the Newcombe Medal, at a ceremony in Melbourne in November.

“I was born and raised in NSW and I’m a big Sydney Swans supporter so to get the chance to come and play in Sydney is fantastic,” said Groth.

“It’s one of the most beautiful cities in the world and we’re lucky to have a tournament there.

“It’s a tournament that feels like home to me so I’m excited to get back. I lost a tough one to Gilles Muller last year so hopefully I can get through a few more matches this time round.

“With the home support behind you and with a good crowd there’s no reason being an Australian that you can’t do well there.”

The men’s and women’s qualifying draws were also released today and will feature only top 100 players, with heavy hitting Pole Jerzy Janowicz and world No. 33 Lesia Tsurenko (UKR) leading the charge for a coveted spot in the main draw.

At 26, Tsurenko has had her most successful year on tour, rising from No. 96 to finish the year at No. 33. She beat ninth-ranked Andrea Petkovic (GER), 20th-ranked Alize Cornet (FRA) and sixth-ranked Eugenie Bouchard (CAN) on her way to the quarterfinals at Indian Wells. A win over Wimbledon finalist Garbine Muguruza (ESP) took her to the quarterfinals in Toronto while she also claimed her first career title in Istanbul.

American Coco Vandeweghe, who toppled Karolina Pliskova (CZE), Sam Stosur (Qld) and Lucie Safarova (CZE) to reach the Wimbledon quarterfinals, Tsvetana Pironkova (BUL), whose magical Sydney run took her from qualifying to the title in 2014, and Ajla Tomljanovic (CRO), who is chasing Australian citizenship, are also in the hunt for main draw entry.

In the men’s draw, Janowicz will be looking to return to the main draw where he upset Australian Nick Kyrgios in the first round in 2015. A break out 2013 saw the Pole reach a career high No. 14 in the world, while in 2015 in won the Hopman Cup with Agnieszka Radwanska and reached finals in Orleans and Montpellier.