Tsonga touches down in Auckland for ASB Classic

Posted by TennisNews.com on January 7, 2016 in Tournament News 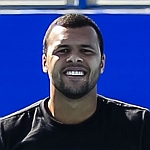 Jo-Wilfried Tsonga has touched down in Auckland ahead of the men’s week of the ASB Classic. ASB Classic organizers welcomed the early arrival of the top seed on his first visit to the City of Sails.

The French former world number five and Grand Slam finalist is one of the biggest names on the ATP Tour boasting 12 tour titles including two Masters 1000 level trophies.  The current world number ten has amassed more than $16millon in prize money over his career to date and is delighted to be in town. His latest victory came in Metz in the last season and Tsonga will hope to add the Auckland title to start his 2016 campaign off with a bang.

Alongside the tennis tournament match play Tsonga will also enjoy Auckland’s beautiful harbor and wants to reel in a snapper with plenty of fishing on his priority list.

On landing in Auckland Tsonga said “After a very long trip, I’m really happy and really excited to be here for the tournament and hope I will enjoy it and have a good time.”

On Tsonga’s arrival at Auckland Airport this afternoon Tournament Director Karl Budge said, “Jo is a true tennis superstar and someone we have wanted to bring to Auckland for three years.  He will certainly entertain the Auckland crowds. It’s great to have a man of such great talent at the ASB Classic for 2016.”