Canberra Would Like To Have Kyrgios Play There
January 14, 2016
Notice: Undefined variable: page_title in /home/tennisne/public_html/wp-content/themes/dante-child/single.php on line 205

Posted by TennisNews.com on January 14, 2016 in Tennis News 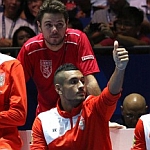 The Association of Canberra Tennis (ACT) would like to get an ATP tournament in the city with local boy Nick Kyrgios playing in it. But they know there is a lot of work to do.

The city is holding a $75,000 challenger this week, upon request.

The tour is also incurring some of the costs of running the event.

With Kyrgios sparking interest in the sport in the area, the association would like to upgrade the event to an ATP 250 tournament, but will require a spot on the schedule as well as corporate sponsorship.

There are already tournaments in Auckland, Sydney and Brisbane leading up the Aussie, as well as the Hopman Cup and an exhibition event in Adelaide.

And while the timing of the challenger is good for attracting solid field — a lot of players are looking for extra matches before a Grand Slam event — it is also the slowest time for the capital city of Canberra, with college students away and less government activity during the holidays.

That means the association has not decided whether the challenger will return, or become a bigger event.

“It’ll rely on what type of support we obtain this time around of the year in Canberra. January’s typically a hard time,” he said.

“We would like to possess a player of Nick’s caliber playing here, [to] have the ability to play in front of the home crowd. But it’s small steps.

“Tennis ACT is not purely about running professional occasions, it is about. . . the entire tennis community.”