Posted by TennisNews.com on March 4, 2016 in Tournament News 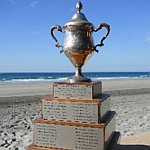 The top seeds will play their opening round matches on Friday at the 127th Annual Pacific Coast Men’s Doubles Championship as first-round action continues at 8 a.m. (PST) at the La Jolla Beach & Tennis Club.

The top-seeded collegiate doubles team of Julian Cash and Arjun Kadhe from Oklahoma State University is slated to take on the unseeded team of Caryl Hernandez and Luca Marquard of the University of California, Irvine. Cash and Kadhe, a pair of All-Americans, are ranked No. 15 in the latest Intercollegiate Tennis Association doubles rankings.

The top-seeded independent doubles team of Krzysztof Kwinta and Bojan Szumanski will face unseeded William Conigliaro and Seon Woo Kim of Boston College in their first-round match at 2 p.m. (PST).

Szumanski, a native of Poland, is assistant men’s tennis coach at Rice University. Following his collegiate tennis career at Texas Tech University, Szumanski reached career highs of No. 574 in doubles and No. 905 in singles on the ATP World Tour in 2009. A former Pacific Coast Doubles champion, Szumanski teamed with Gustavo Gonzalez to win the title at the La Jolla Beach & Tennis Club in 2014.

The first three rounds of play on Friday will use a shortened match format (8-game Pro Set). On Saturday and Sunday the match format will be the best two of three sets.

In Thursday’s first-round action, 15th seeded Nolan Paige and David Wilczynski of Stanford University advanced to the second round with an 8-3 victory over Alexandre Miaule and Horea Porutiu of the University of California, San Diego.

The starting time for the remainder of the tournament will be as follows: Friday  – 8 a.m.; Saturday and Sunday – 9 a.m. All times are PST.  The La Jolla Beach & Tennis Club welcomes tennis spectators to view the tournament with free admission. On-site parking is available for a nominal fee.

Live audio play-by-play of the semifinals and final, which are scheduled for Sunday, March 6, will be available on RadioTennis.com.  Tennis broadcaster Ken Thomas will provide the web cast commentary.