Posted by TennisNews.com on April 3, 2016 in Junior News 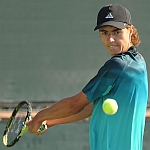 Axel Nefve is halfway to doing what the past two boys’ 16s singles winners of the USTA International Spring Championship have done: win Carson and the ASICS Easter Bowl 16s titles back-to-back.

The 15-year-old, No. 2-seeded Nefve departed the South Bay for the Coachella Valley and the second leg of his journey on Saturday following his, 7-5, 6-0, win in the championship match over No. 6 Adam Neff of Bradenton, Fla. Both John McNally (2014) and Oliver Crawford (2015) won Carson ISC 16s titles before doing the same the following week at the ASICS Easter Bowl.

The Paris-born Nefve moved to the Chicago suburb of Hinsdale, Ill., when he was 6-years-old and learned the game from legendary coach Jack Sharpe. He recently moved to Boca Raton, Fla., where he is training part-time with the USTA and also works with one of Serena Williams’ coaches, Robbye Poole.

“Yeah, she kind of stole him from me,” Nefve joked after the match, adding that, “It’s great heading into the Easter Bowl with a Carson win.”

In the girls’ 16s singles final, 15-year-old No. 14-seeded Jessi Muljat of Sacramento, Calif., overcame a late rally by 14-year-old Katie Volynets of Walnut Creek, Calif., to win the title, 6-4, 7-5. Muljat held a 5-2 lead in the second set when she lost her focus and began thinking about the trophy ceremony.

Muljat lost in the first round at Carson last year and said she wasn’t nervous from the outset, coming out strong and taking a quick 3-0 lead in the first set.

Getting out in front quickly – but staying there – was the theme in both the boys’ 18s singles semifinals as both ended in quick fashion as No. 4-seeded Sam Riffice of Granite Bay, Calif., swept past defending champion and No. 2-seeded William Blumberg of Greenwich, Conn., 6-0, 6-1. Just as easily, No. 11 Liam Caruana of Austin, Texas, sent the before mentioned and injured Crawford packing, 6-0, 6-0.

“That’s a fluke,” Caruana said of two such lopsided scores in such a high-level international tournament so deep into the tournament. “I don’t think you’ll ever see that again.”

Caruana, 18, spent the past fall school semester at the University of Texas, but didn’t see his tennis improving enough balancing his studies, so he quit school. Since then, he qualified for a USTA Pro Futures event in Long Beach, and won a round beating former Vanderbilt All-American

Gonzales Austin in the first round. He then traveled to Australia and was the last direct acceptance in his first main draw Grand Slam Australian Open junior event, losing in the third round Down Under.

Caruana said he knew Crawford was hobbled and had very little movement. “It’s never easy to play a guy when he’s injured because you can get a little nervous,” Caruana said of his first meeting with Crawford.

Crawford said after the match that he couldn’t walk to get out of bed in the morning, and that he had an in-grown toe nail and two blood blisters on his right foot. “It wasn’t as bad yesterday and the tape helped,” he said, adding that he’s never defaulted from a match. “I just thought I’d give it a go. You never know what’s going to happen on the other side of the net.”

Caruana beat Riffice in their only other career singles meeting at the Winternationals 14s a few years back, a match Caruana couldn’t recall. He will likely think back to his quarterfinal doubles match in Carson as the No. 2-seeded team of Caruana and Ulises Blanch held seven match points, only to lose each of them and the match to Riffice and partner Brian Cernoch. The top-seeded team of Blumberg and Nathan Ponwith won the 18s doubles title on Saturday over Riffice and Cernoch, 6-1, 6-1.

Riffice said he executed his singles game plan against Blumberg to perfection, and that he’s going to have to do the same against a tough Caruana who he said has “every shot in the book.”

It will be an all-Southern California battle for the girls’ 18s singles title on Sunday as 15-year-old Claire Liu of Thousand Oaks, Calif., meets 16-year-old Kayla Day of Santa Barbara, Calif. Both players train at the site of the tournament, USTA Training Center – West at StubHub Center. Liu held off top-seeded Amanda Anisimova of Hallandale Beach, Fla., in three sets, 7-6 (4), 1-6, 6-4.

A regular practice partner with Day, Liu is 2-0 against her having not dropped a set in two matches, the last in the quarterfinals of the Eddie Herr in December.

Liu said making the Carson final will take some pressure off her to do well at the ASICS Easter Bowl next week. “I did not want to lose early here and then have the pressure of defending at the Easter Bowl,” Liu said. “So it’s nice to get to the final and I’ll be able to play more relaxed.”

Shibahara also won the doubles title back in 2013 in the 16s, the same year she beat a 12-year-old Liu to also win the 16s singles crown.