Andy Murray Is Contracted To Under Armour, But Still Wears adidas Shoes

Posted by TennisNews.com on September 28, 2015 in Business News
0 Comments 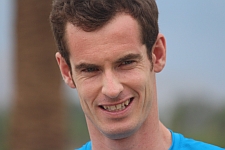 Andy Murray’s clothing company, Under Armour, is keen to get the No. 3 playing in its own shoes as soon as it can. Though signing with Under Armour just before this season, Murray was still wearing adidas Barricade shoes for his hardcourt campaign, including at the US Open.

The discrepancy has become a flashpoint in the growing competition between the two companies. Around the time Murray was making the switch to Under Armour from adidas, the US-based company also moved ahead of the German-based adidas to become the second-largest sports apparel seller in the United States. However, the shoe business is new to Under Armour, which does not yet have a tennis shoe in stores.

Though it developed a custom set of shoes for Murray on grass court, the 28-year-old has kept playing with his former company’s footwear during other portions of the season.

At the US Open, Murray said being comfortable and confident with equipment was his top priority when deciding what to wear, saying, “You know, you can’t take risks with those things because if you, you know, have an issue there, get blisters or twist an ankle or whatever, that can cost you.

“It’s different if it’s a T-shirt or shorts. The shoes and the racquets are obviously extremely important.”

The company told the Wall Street Journal that it was having regular fittings of hardcourt shoes with Murray, indicating that it moving along in the development process.

Murray’s international profile is something the company wants to use as it begins to expand internationally, given that it has signed few athletes who are not American.

“We have a lot of exciting growth coming from the international side of the business, and certainly tennis plays a big part in that,” the company’s vice president of sports marketing told USA Today. “With such a global icon like Andy Murray, that partnership is really meaningful.”

It is opening 100 stores around the world this year, and looking to become a global challenge to the top sportswear companies.

For that, it wants Murray to be wearing its apparel from top to toe.

Leave a reply Click here to cancel the reply