Pennetta in Straights Over Radwanska at WTA Finals Singapore 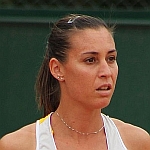 After suffering a one-sided loss to Simona Halep in her opening round robin match, Pennetta knew another reversal would all but end her hopes of reaching the semifinals.

But precise serving, punchy groundstrokes and a stubborn refusal to give into the pain from a blister on the sole of her right foot, showed that there was plenty of fight left in the oldest woman in the field.

Some of the credit for the transformation must go to Pennetta’s coach, Salvador Navarro. “He just told me to be more aggressive and show I wanted to win because I was not that sure all the time,” Pennetta said.

The Italian, who finished with 37 winners, was the aggressor throughout, but did not have things all her own way.

In the first set, she rallied from 5-3 down and then in the second play was held up for more than five minutes as Pennetta had her right foot dressed and heavily bandaged after a nasty slip. On the resumption, three clean winners – including the deftest of forehand lobs – helped her pocket the Pole’s serve.

Radwanska battled gamely to the bitter end, fending off three match points before Pennetta threaded a backhand winner down the line to finally close out a 7-6(5), 6-4 victory.

“I tried to be really focused, tried to hit the ball hard, be aggressive and not give her too much time to do her job,” Pennetta said. “I mean, she plays unbelievable, she can let you run for hours all over the court, so you need to be really aggressive with her.

“My serve helped me a lot today and helped me play the way I did today. Of course the key was to be really near to the baseline, not to give up much of the court and take advantage. It’s my first time in the Finals as a singles player. It’s really nice to play here, the court is nice and the crowd is amazing.”

The last match of the round robin stage – and potentially her career – comes against Maria Sharapova. “After this win, I still have a little bit of chance. It’s good to be in this position, to have a chance to play another match and get into the semifinals.”