Simon Is In Singapore Representing The WTA

Simon Is In Singapore Representing The WTA
October 27, 2015
Notice: Undefined variable: page_title in /home/tennisne/public_html/wp-content/themes/dante-child/single.php on line 205 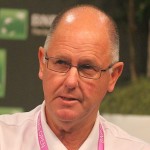 Newly installed WTA chief executive officer Steve Simon is hard at work this week at the WTA Finals in Singapore and has already identified two of his main priorities after taking over the leadership reins from Stacey Allaster.

One is making up ground on top-flight men’s tennis and the other is to establish a better relationship with the other ruling bodies of the sport.

Simon’s previous role as tournament director and chief operating officer of the BNP Paribas Open at Indian Wells means he knows Chris Kermode, his opposite number with the ATP World Tour. And with Dave Haggerty succeeding the outgoing Francesco Ricci Bitti as president of the International Tennis Federation, relations between two fellow Americans should be more convivial.

“Obviously the alphabet soup of tennis needs to get along and there’s no reason why we shouldn’t,” said Simon. “I’m hopeful of good, constructive conversations and looking at areas where we can integrate our efforts, versus duplicating our efforts, to the betterment of the game.  I think there is room for that.

“We all have individual businesses that we’re running and you won’t always agree.  But the idea that there is any animosity between is unacceptable to me.  There is no reason for that.

“Everyone is going to have to make business decisions that are in their best interest, but I think there are an awful a lot of areas where we could create some efficiencies and integrations that would raise the game for all. There shouldn’t be any fear that one group is getting bigger than the other.

“Maybe we can mend some fences that were in the past, maybe being trampled down a little bit.”

Simon hinted the main calendar section that needs the most attention is the congested spell between the US Open and the WTA Finals, when so many players are facing issues of injury and fatigue. This suggests that the increasing number of Chinese tournaments during the fall will he halted.

However Simon believes women’s tennis is in a good place although the public appeal of the big names such as Djokovic, Federer, Murray and Nadal continues to monopolize.

Speaking on behalf of the WTA, he said: “There needs to be a focus on making sure that we’re delivering a premium product at all times and utilizing evolution and innovation and looking at our structure so that we can deliver that product to the marketplace.

“We do have some great match ups. I think that we have to continue presenting this game in a way that features them and puts it in a premium position at all times. We need to have that culture of striving for excellence and striving for winning.  We have to work at our structure so that we can place the events and the athletes in that place.”

And Simon is clearly not happy that the WTA Finals are not the culmination of the touring year and that the WTA Elite Trophy in Wuhan follows it in the calendar.  “That’s a calendar issue and one I think that has to be addressed,” he said. “In a perfect world I would certainly like the WTA Finals to be the last event of the year.

“I don’t have the solution to it today, but it’s something that we’re going to look at.  We’re very proud of the Zhuhai event coming on board.  It’s another opportunity to showcase the depth of women’s tennis but I would like to see if we could flip the weeks possibly.”