Posted by TennisNews.com on November 21, 2015 in Tournament News 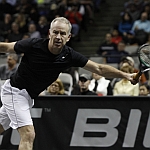 Mats Wilander said he played as well as he could against 56-year-old John McEnroe at the ATP Champions Tour event in Verona, Italy on Friday. He lost 6-2, 6-4.

With Italian great Adriano Panatta looking on, Wilander did all he could to make it competitive in front of 3,000 fans, but McEnroe had too much for him.

Wilander, 51, said: “It doesn’t matter how old John is – he still plays so well. It is a pleasure to play against him, and at the same time a pain in the butt! I can’t play any better than I did tonight, and I feel like I don’t have a chance to win a set when we plays like that. It was a great evening. I’m actually happy losing 6-2, 6-4!”

“It was a huge win for them, and for Paolo personally,” remembered Wilander. “It’s amazing how one big important match will make you stay friends for ever. 25 years later here we are. John McEnroe and I played a Davis Cup match in 1982 (the second longest in Davis Cup singles match in history – six hours and 22 minutes. McEnroe won 9-7 6-2 15-17 3-6 8-6) and when you share something as special as that, you are closer and always share that memory. Once you’ve taken each other the distance, you have respect for that person beyond being a normal being – you have respect for them as a fighter and their character. It was really fun to see Paolo tonight.”

After a day visiting the Ferrari factory on Saturday, the players will move on to Modena on Sunday for the final between Bruguera and McEnroe.

After Italy, the Tour will journey to London for Champions Tennis at the Royal Albert Hall, 2-6 December.