Cash Would Love To Get McEnroe And Kyrgios Together

Cash Would Love To Get McEnroe And Kyrgios Together
December 17, 2015
Notice: Undefined variable: page_title in /home/tennisne/public_html/wp-content/themes/dante-child/single.php on line 205

Posted by TennisNews.com on December 17, 2015 in Tennis News 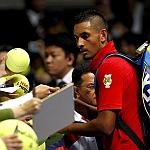 Pat Cash has the strongest possible hopes that Aussie bad boy Nick Kyrgios can begin repairing his career by accepting an offer to be coached by fellow legend John McEnroe, US TV talker Mac has said he would welcome the chance to try and help the 20-year-old who is currently more noted for his disciplinary problems than the tennis which has led him to wins over Roger Federer, Rafael Nadal and Stan Wawrinka.

Kyrgios, who will begin his season in a few weeks at the Hopman Cup in Perth, is currently going coachless as he tried to get his promising career back on track. McEnroe has called the out-of-control youngster a “bonehead,” but believes he can help point the Aussie back to tennis.

“He’s been there, done that, been on the end of it,” Cash told Australian media of his old mate McEnroe.

“I saw John just last week, interviewed him on stage at a function actually, and I know he’s a big fan of Nick. John would be a good person to take advice from. Nick is his own person really, he tends to want to do it his own way.”

Cash compared the outspoken Kyrgios to Andre Agassi, another player who ran his life and career his own way, “I remember Andre telling me things, do training stuff which made me think he was nuts. Once he told me he was flying to Las Vegas three days before the French Open, I didn’t say anything but I thought he was crazy, and he ended up making the semi-final of that tournament.

“Sometimes people feel their way is the right way. John has got some pretty strong opinions, but Nick is more than a Vaudeville act, he is a quality player. He needs to be consistent to pull off a big Grand Slam win and I think he can do that.

“Whether he can be consistent enough to be a top five player, or No.1 in the world, I don’t know. “I’m not even sure if Nick wants to be top fiver or No.1, maybe he doesn’t want to be. If I was coaching him, I’d be trying to get him ready to consistent enough to win the seven successive matches you need to, to win a Grand Slam, and if you become top five in the world that is a bonus.”

Kyrgios and McEnroe will have a chance to possibly discuss things on January 11 in Sydney at a quick-tennis Fast4 exhibition event which also features Cash, Lleyton Hewitt, Rafael Nadal and Gael Monfils