Djokovic’s Absence From IPTL Is Noted 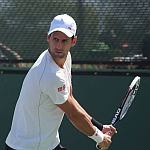 IPTL rainmaker Mahesh Bhupathi is feeling the absence of world No. 1 Novak Djokovic after the strategic Serb pulled the plug this month in his planned participation in the December exhibition series which has attracted the likes of Roger Federer, Rafael Nadal and Serena Williams for brief on-court appearances due in part to the massive sums of millions on offer.

But with a record $21 million banked 2015 in prize money alone by Djokovic, a few more bucks in the Monte Carlo bank account would hardly make a difference. Instead, what the Serb was craving most was rest, family time and a detox from a year’s worth of top-level tennis.

Djokovic renounced his participation on the USE side in the three-week exhibition series before the start of the season last week. “Of course, losing him (Novak) is a big loss, but he called and said that after the kind of year he has had, he plans to not touch a racket for a month in order to re charge for the next season. He really enjoyed the format last year and will be back next year,” former player Bhupathi told Indian media.

Djokovic is still absorbing the implications of the season of his life, where he lost just six out of 88 matches and won 11 titles including three Grand Slam events and four Masters.

Bhupathi is not giving up hope that Djokovic will return to the fold for 2016. Meanwhile, the format seems to be working well. “They (players) all love the team atmosphere which hardly exists in tennis. . . That appeals to the players. They loved it in the first season and that’s why they have come back this time too.

Already, the Indian is hoping to build on the IPTL success story as it completes its second edition.

“Each team will be different. I think countries like India and Philippines will break even in year three,  if not earlier. Dubai and Singapore are mature markets for sports and entertainment, so they could take a year longer. Japan is a very big market and are expecting to break even next year.”