Kokkinakis To Skip Exhibition To Protect His Shoulder 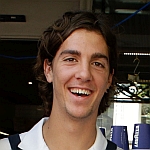 Australian Thanasi Kokkinakis is taking no chances with the start of the ATP season just weeks away, with the top teen withdrawing as a medical precaution from an exhibition night with Lleyton Hewitt in Tasmania.

The date next weekend with the retiring point man of the Australian game will be missing the No. 80 challenger, who is being treated for shoulder strain during the off-season. Kokkinakis’ absence from Hobart is simply good sense, promoter David Drysdale – also manager of Hewitt – told AAP.

“I think he’ll be fine,” said Drysdale, who has found a replacement in Australian Sam Groth, “Thanasi has had problems with his right shoulder and only commenced hitting again this week and, as much as he still wanted to come and play, after talking with his team last night, it was agreed that in Thanasi’s best interests for the Australian summer, it was safer that he withdrew.

“He wants to take it slowly and his medical team also thought playing a full-on match might be too much too soon. The great thing was I then rang Sam and he agreed on the spot to take Thanasi’s place.”

The training schedule of Kokkinakis should not be affected as the 19-year-old prepares for the January tennis summer.

Hewitt took the substation of opponent in his stride as the 34-year-old goes through his tennis retirement and getting stuck into his new job as Davis Cup captain from 2016. “It’s the best decision for Thanasi to ensure he is right for January,” said Hewitt prior to next Friday’s showdown.