Posted by TennisNews.com on December 31, 2015 in Business News 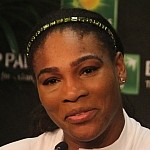 The debate is as legendary as the athletes themselves: who is the greatest sports star of all time? According to Americans who follow at least one sport, Michael Jordan is still #1 – maintaining his status at the top of the list. Babe Ruth rises from 3rd to 2nd place and Muhammad Ali moves up the ranks as well, from 4th to 3rd. New to the list – and Sports Illustrated’s 2015 Sportsperson of the Year – is tennis star Serena Williams, who comes in 4th. Rounding out the top five is quarterback Peyton Manning, who previously ranked 8th.

Quarterback Joe Montana holds steady in his spot at #6, while LeBron James makes the jump shot and moves up from 10th in 2009 to 7th. Meanwhile, landing in a sand trap, Tiger Woods sees a large drop from 2nd in 2009 to 8th. Tom Brady, another newbie on the list and another quarterback, places 9th, while hockey all-star Wayne Gretzky ranks 10th (previously 7th).

Demographic divides
Despite differences among gender, region and ethnicity, one thing is clear – Michael Jordan reigns supreme. The same can almost be said among the generations as well, with the exception of Matures, who say Babe Ruth is the greatest sports star of all time. Looking to second and third place, some greater differences arise:

While Whites rank Babe Ruth 2nd, no other ethnicities put the baseball great in their top three. Rather, Muhammad Ali is the popular number two choice among Blacks, Hispanics and Asians alike, with LeBron James tying for 2nd among Blacks. Muhammad Ali ranks 3rd for Whites, while LeBron is 3rd for Hispanics. Among Asians, on the other hand, Serena Williams, Joe Montana, Tom Brady, and Wayne Gretzky all tie for 3rd place.

Very few differences exist among the regions, with all saying Babe Ruth is 2nd on their list while Muhammad Ali is 3rd. However, the Midwest offers up Aaron Rogers as a 3rd place tie.

Greatest tennis player
Tennis sees a big upset this year, with Serena Williams – unranked in 2009 – snagging the #1 spot. Roger Federer drops down from 1st to 2nd, as does Pete Sampras from 2nd to 3rd. Arthur Ashe jumps up one spot to #4, while the also-formidable Venus Williams finds her own spot on the list in the #5 slot. With the Williams sisters making big moves, Jimmy Connors (previously 3rd) and Andre Agassi (4th in 2009) lose their footing on the top five list.

Methodology
This Harris Poll was conducted online within the United States between September 9 and 17, 2015 among 2,368 adults (aged 18 and over). Additionally, oversamples were collected in English and Spanish among 511 Hispanic (representing Spanish-dominant, English-dominant and Bilingual profiles) respondents and in English among 179 Asian respondents. Figures for age, sex, race/ethnicity, education, region and household income were weighted where necessary to bring them into line with their actual proportions in the population. Propensity score weighting was also used to adjust for respondents’ propensity to be online.

All sample surveys and polls, whether or not they use probability sampling, are subject to multiple sources of error which are most often not possible to quantify or estimate, including sampling error, coverage error, error associated with nonresponse, error associated with question wording and response options, and post-survey weighting and adjustments. Therefore, The Harris Poll avoids the words “margin of error” as they are misleading. All that can be calculated are different possible sampling errors with different probabilities for pure, unweighted, random samples with 100% response rates. These are only theoretical because no published polls come close to this ideal.