Federer Vows To Return To Australian Open Next Year

Posted by TennisNews.com on January 31, 2016 in Tennis News 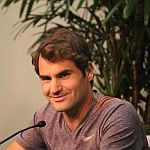 Roger Federer buried his massive disappointment at losing 6-1, 6-2, 3-6, 6-3 in a dramatic Australian Open semi-final to hot rival Novak Djokovic, with the Swiss vowing a return to Melbourne Park in a year.

The 34-year-old showed flashes of shot making brilliance but after being buried in the first two sets in an hour by Djokovic, could not find the road to salvation.

But a vast majority of the full-house crowd showed their love for the veteran, inspiring Federer to make sure he’s back in 2017 for another go. “I definitely walk away from a place like this and say, ‘I want to come back next year. I want to relive it again,'” said Federer, now trailing Djokovic 22-23 in their lengthy career series. “. No problem to hit the practice courts.

“I can’t wait for the next tournament, everything’s easier when you have a crowd like that. I felt that again tonight.”

Federer rallied to win the third set to thunderous applause but could not maintain momentum as Djokovic reached his sixth Melbourne final from a fourth-set match point. “He definitely maybe dropped his level of play just ever so slightly (in the third set),” Federer said. “But that’s all it takes, it’s not easy to keep playing the way he was playing.

“I started to get a few more free points. I started to get more opportunities on his service games, as well. Margins are small out there. Even in a match like tonight where the first two sets run away, you can’t get discouraged. You have to keep going, stay aggressive. I think my game started to come more and more.”

Federer said he’s seen it all before from Djokovic, who has earned half of his ten titles at majors from success in Melbourne Park. “He’s played this well against me in the past. He’s a great front-runner. He starts swinging freely. Usually does it towards the end of the match, obviously when he’s in the lead. It’s rare for him to do that early on.

“I wish I could have one more chance to play another match here this week, but I don’t. So of course I’m disappointed maybe for parts of my fans and also for myself.”