The Sport Of Tennis Is Taking Anti-Corruption Action

Posted by TennisNews.com on January 31, 2016 in Headline, Tennis News 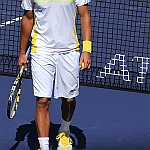 The growing word around the tennis leaders who convened at the Australian Open this week is that although the recent BuzzFeed News and BBC report angered many with its’ historical content on match fixing , from it ultimately some good will arise. And the first sign is the announcement of an independent review of tennis anti-corruption measures by London’s most eminent sports lawyer.

It was an early start at Melbourne Park this morning as a hastily arranged press conference featured Philip Brook, All England Club chairman and current head of the Tennis Integrity Board, Chris Kermode, the ATP World Tour’s executive chairman and president and David Haggerty, president of the International Tennis Federation.

After a day of meetings previously that also included WTA chief executive Steve Simon and the three other Grand Slam chairmen; Katrina Adams of the US Open, Jean Gachassin of the French Open and Steve Healy of the Australian Open, the independent review of the Tennis Anti-Corruption Program was announced.

Sports law expert Adam Lewis QC has been appointed and any recommendations for change he will make to stamp out the shady side of tennis, have been guaranteed to be implemented.

Brook said: “The Tennis Integrity Unit was called into question by an investigatory BBC program. And while it did not reveal anything new, it was widely written about and has caused damage to our sport. So it is vital that we repair this damage and that we do so quickly.”

Lewis is well known to British sports figures for his work in soccer on behalf of both UEFA and Chelsea FC. He was also involved in the final stages of the Lance Armstrong case and is chairman of both the Rugby Football Union’s Appeal Board the UK Athletics Tribunal.

“Certainly Adam has a very fine record and he’s been in sport in many different areas,” said the ITF’s Haggerty. “This review is going to be funded by the Tennis Integrity Board and all the findings will be implemented. He will get all the resources he needs to do a thorough review.”

Kermode added: “The last thing anyone wants is another sports body investigating itself, which is why we have taken this very bold step to commission a completely independent review,” said Kermode.

“I think we had to act quickly. We’re in a toxic environment for sport at the moment in terms of it’s an easy target for people to have a go with recent allegations at other governing bodies. We want to be as open and transparent as possible to demonstrate that we will look at this thoroughly.

“There is a zero, zero tolerance for this in our game. But let’s review and see how we can move forward better.”