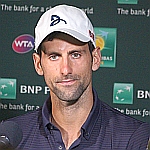 World no.1 Novak Djokovic certainly fanned the flames with his insistence that players on the ATP World Tour should receive more money because their contests draw more fans.

“I think that our men’s tennis world should fight for more because the statistics are showing that we have much more spectators on the men’s tennis matches,” said Djokovic.

“I think that’s one of the reasons why maybe we should get awarded more.”

In years gone by Djokovic might certainly have had a case, with colossal battles between himself, Rafael Nadal, Andy Murray and Roger Federer extending far longer than best of three sets women’s Grand Slam finals. But Sunday’s 6-2,6-0 win by the Serb over Milos Raonic that clinched a fifth title for him at Indian Wells followed the recent trend of one-sided contests.

And with regard to Moore’s remarks, Djokovic said: “It’s not politically correct. It was maybe exaggerated a little bit, but that’s just my opinion.”