Posted by TennisNews.com on March 23, 2016 in Tournament News 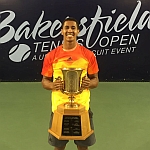 Michael Mmoh, 18, won his fourth career professional men’s singles title today at the Bakersfield Tennis Open, a $25,000 Futures event.  Mmoh, currently ranked #359 on the ATP World Tour Singles Rankings was playing in his second Futures singles final of the year and was able to clinch his first title of 2016.  He will be competing in the main draw of the Miami Open next week where he received a singles wild card.