Posted by TennisNews.com on March 24, 2016 in Business News 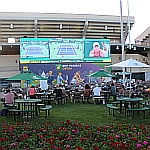 The Indian Wells Tennis Garden will make numerous improvements to Stadium 1 following the 2016 BNP Paribas Open, including upgrading, expanding and adding concessions, restrooms and suites for the 2017 tournament, it was announced.

In an effort to continue enhancing the overall fan experience in the second largest tennis stadium in the world, existing Stadium 1 concessions will be upgraded and expanded. Four premium walk-in concessions, similar to Stadium 2, will be added to the main concourse allowing for the introduction of new food concepts and a greater menu variety. In addition, concessions will be created for the second suite level and the upper bowl (Loge and Grandstand). The existing open patios at the perimeter of the suite level will become shaded venues, offering tables and chairs with great views of the Tennis Garden grounds below and the mountains in the distance.

All of the restrooms on the Concourse and second level will be replaced, increasing both the quantity of facilities and integrating the design aspects of Stadium 2 restrooms. Restrooms will also be added to the upper bowl, where there were none previously.

The suites throughout Stadium 1 will be completely renovated. In addition, the existing open air portion of the concourse level will be covered to allow the suites on the second level to be significantly expanded, and include private bathrooms, and larger food service and hospitality space.

“We continue to strive to enhance the overall experience at the BNP Paribas Open and Indian Wells Tennis Garden,” Moore said. “Food and restrooms are two very important things that shape a fan’s overall perspective of an event, and we want to improve upon those areas in Stadium 1 to make them exceptional. In addition, for our fans in the suites, we believe it should be a premium experience, and our changes will reflect that.”

Adjacent to the concourse, a new private club venue will be added for the Indian Wells Tennis Garden members. It will include a shaded outdoor deck with great views of the practice courts during the tournament, and create a yearlong vantage point for watching tennis by club members. A greatly expanded workout area will be added to this venue, which will be utilized by players during the tournament.

A new Player Services building will also be constructed, and this two-story space will provide seamless access to areas such as the locker rooms and the Players Lounge. In addition, it will consolidate functions such as credentials, stringing, transportation, and laundry services for the players.

The existing broadcast booths will be upgraded, and two new broadcast booths on the east side will provide great vantage points of the Tennis Garden Campus and include state-of-the-art technology.