Posted by TennisNews.com on March 26, 2016 in Business News 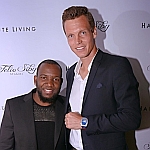 A fashion design company has signed Tomas Berdych to a sponsorship deal. Florida-based Felio Silby, which makes luxury watches, shoes and bags for men and women, will see the No.7-ranked Berdych become one of its ambassadors.

The Czech, who has long had an interest in watches, had previously been one of the few top players not to have a deal for watches. But he showed a picture of himself on social media wearing one produced for him by the company.

Their association appears to have been agreed to at least a couple of weeks ago but became official when he showed the expensive piece sitting on his wrist. Asking for fan reaction, he said, “Collaboration with FelioSiby is here.”

The recently-launched company has sponsored a tennis player for the first time. Berdych and his wife, Ester Satorova also had a photo shoot together for the line.

But partnering with a fashion house is nothing new for Berdych, who had a deal with H&M before switching to adidas. The retailer used him for both on-court and off-court wear.

His wife is also a model, appearing in fashion shows, and a regular presence courtside at tournaments.