Posted by TennisNews.com on March 27, 2016 in Tournament News 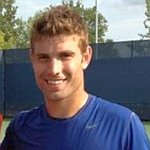 Count Eric Quigley as one of the many players taking part in the USTA Men’s Pro Tennis Championships of Calabasas who are enjoying the warm Southern California weather and the first-rate facilities at the longtime home of this USTA Pro Circuit event, the Calabasas Tennis & Swim Center.

“I really like it here,” said Quigley, the winningest player to ever play for the University of Kentucky. “The weather is always nice, and it always feels like there’s a little altitude, which is good for me and makes the balls fly a little more. It’s a great facility here and it’s always good to hit the gym afterward and to take a shower before my match.”

The No. 7-seeded Quigley, who will also play in a doubles semifinal on Saturday, earned his spot in the semifinals by way of his 7-6 (2), 6-4, victory over Brazilian qualifier Marcelo Zormann.

Taking a shower before his match is a routine Quigley said he started after he joined the tour following his college days. “A lot of the guys do it,” he said. “It keeps you awake and you feel refreshed and clean.”

At the Long Beach Pro Futures Tournament in January, Quigley must have felt like he was back playing college tennis again with wins over Dennis Nevolo (Illinois), Evan King (Michigan) and Raymond Sarmiento (USC), all of them former All-Americans, before suffering a bout of food poisoning and being turned away by eventual champion Yannick Hanfmann, the former USC All-American in the semifinals.

He left Long Beach and traveled with his girlfriend to Maui for the first time and promptly qualified at the $50,000 Challenger there before losing in the first round of the main draw to former Michigan star Jason Jung.

Quigley will play top-seeded Henri Laaksonen of Switzerland in the first semifinal Saturday beginning at noon. Laaksonen beat West Covina’s Ernesto Escobedo, 6-4, 6-4 on Friday. Quigley has faced Laaksonen once before. “He took me out in the quarterfinals at the Champaign Challenger and he went on to win that,” Quigley said of the former Davis Cup teammate of Roger Federer and Stan Wawrinka.

Quigley had a chance to hit with the game’s all-time Grand Slam champion Federer back in 2012 after graduating college and playing at the Cincinnati Masters event.

“(Laaksonen) has a big game in general and he’s not afraid to go all out,” Quigley said. “When he gets going he can play like those guys.”

In the other semifinal it will be No. 2-seeded Matthew Barton of Australia taking on American No. 3 Mitchell Krueger, who beat No. 5 Liam Broady from Great Britain, in the late match, 6-3, 6-4.