Posted by TennisNews.com on November 6, 2016 in Headline, Tennis News 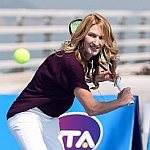 Tennis legendary Stefanie Graf, the ambassador for the second edition of WTA Elite Trophy Zhuhai which was organized by Zhuhai Huafa Group, showed up this morning at the city’s landmark bridge which connects Hong Kong, Macao and mainland China to promote the premium event and the host city, aiming at further connecting Zhuhai with the world.

The Y-shaped Hong Kong-Zhuhai-Macao Bridge, still under construction and expected to be put into use soon, will be the longest sea-crossing bridge in the world.

Stefanie Graf was joined by Caroline Garcia, one of the 12 single players at the tournament held from November 1 to 6, 2016, to play tennis at a mini court temporarily established on the landmark facility, witnessed by a group of VIP guests including Mezle Chung, Vice General Manger of Zhuhai Huafa Group Co., Ltd., and Micky Lawler, President of WTA.

Being the top mandatory event in south China, the 2016 Huajin Securities WTA Elite Trophy offers a total of $2,210,000 in prize money. Twelve singles players were divided into four groups of three in a round robin format and one winner in each group enters the semi-final to fight for the title and 700 ranking points.  The semifinals presented today include Johanna Konta, Elina Stitolina, Petra Kvitova and Chinese highest ranking player Zhang Shuai.

This is the first time for Stefanie Graf to come to public activity in mainland China.  The German female player was known for her legendary career of being world No.1 for 377 straight weeks and winning 22 Grand Slams, including a Golden Slam in 1988 when she won four Grand Slams and a singles gold medal in Seoul Olympics within the same season.

“The premium year-end tournament had helped the world know Zhuhai better since it was introduced to the city last year,” said Mezle Chung, “And we believe Stefanie Graf, who has displayed the qualities both on and off the court that make her one of the greatest and most respected athletes of all time, will help the WTA Elite Trophy and the city of Zhuhai further increase its global profile.”