Posted by TennisNews.com on October 25, 2015 in Headline, Tournament News 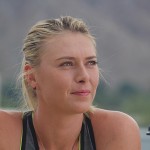 Maria Sharapova battled hard for nearly three hours, two hours and 47 minutes to be exact, to edge Agnieszka Radwanska in her first round robin match at the BNP Paribas WTA Finals Singapore presented by SC Global on Sunday. It was the Russian’s first match win since Wimbledon.

The only two other times the two met at the WTA Finals they played three-hour-plus marathons, and this one looked headed the same way, with the No.5-seeded Radwanska toughing out a 56-minute first set and, after dropping the second set, bringing up three break points for a 2-0 lead in the third.

But the No.3-seeded Sharapova never stopped fighting, saving all those break points and building a 5-2 lead, and after Radwanska closed the gap to 5-4, the Russian finally closed it out, 4-6, 6-3, 6-4.

It was Sharapova’s first match win since Wimbledon – since leaving SW19, she had only played one match, a retirement loss in Wuhan, in between some major struggles with leg and forearm injuries.

“This is my first completed match since July, so it’s a pretty big deal for me!” Sharapova said.

“Coming into this event I did everything I could to be healthy. I just didn’t quite know how my results would go. Even though I didn’t play my best tennis today I still got through, and that’s what matters, especially against such a tough competitor like Radwanska. We always have such close matches here.

“To fight hard and be able to win the match in the end means so much to me.”

And the five-time Grand Slam champion and former World No.1 sounds like she’s just getting started.

Both players put together some impressive numbers on the match: Sharapova finished with a -1 winners-to-unforced errors differential, 55 to 56, while Radwanska finished with -2, 21 to 23.

In the end it may have been all about the break points – Radwanska converted three, Sharapova four.

“I definitely didn’t use my chances,” Radwanska said. “I started slowly in the second set and I guess I was too late to come back. Obviously in that third set I could have come back to 5-all, at least.

“In those kinds of matches, when you’re not using your chances, it’s not really ending your way.”