Posted by TennisNews.com on October 27, 2015 in Headline, Tournament News 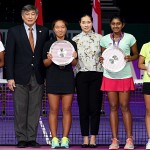 Organized by the WTA with partners Sport Singapore and the Singapore Tennis Association, the top U14 and U16 girls from across 17 countries in Asia-Pacific competed during the BNP Paribas WTA Finals Singapore presented by SC Global. Aside from the on-court action, the young girls were involved with the Open Draw Ceremony, coaching seminars as well as an intimate chat with Li Na.

Legendary WTA player, Li Na, who is also the WTA Future Stars Ambassador was on hand to present the winners with their trophies and meet with these aspiring young tennis players.

“It’s a great learning experience for these Future Stars to have gained the opportunity to come to the WTA Finals and enjoy close access to the top women’s tennis players in the world. Not only have they played the matches but they’ve also gained great experience in media activities as well as interacting with fans, which are crucial parts of being a professional tennis player.” said Li Na.

Pranjala Yadlapalli from India stepped on court ready to win as she defeated Hye Ran Yun from Korea convincingly, 6-2 6-0. Yadlapalli did not drop a set en route to becoming this year’s U16 champion. This is the second year that India has lifted the U16 WTA Future Stars trophy.

“I am really happy to have won and I have really enjoyed my time in Singapore. Playing in the WTA Future Stars tournament has really boosted my determination to make it as a WTA player. The Finals is amazing and I would love to be able to come back here and play as a top-eight player,” said Yadlapalli.

The inaugural Li Na Inspiration Award was presented to U14 player Mahak Jain of India and Australian competitor in the U16 category Monique Burton. These athletes displayed the same outstanding qualities that made Li Na the endearing personality and champion that she is both on and off the court.

“It was such an honour to receive the Li Na Inspiration Award, it means that the WTA see qualities in me that are like Li Na, which is amazing. It’s a real boost to my game and gives me more determination to try and turn professional,” said Burton.

WTA Finals Tournament Director and Vice-President for Asia-Pacific, Melissa Pine added, “The WTA Future Stars is an opportunity for young girls across Asia-Pacific to experience the WTA’s crown-jewel event. It is about more than tennis, it is about bringing girls together who share a passion for tennis, forge new friendships and create memories that last a lifetime. At the WTA, our legends are able to inspire a new generation of players and we know that meeting Li Na today will be one of the biggest highlights of these young players’ careers.”