Posted by TennisNews.com on October 29, 2015 in Tennis News 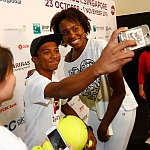 For Venus Williams – win or lose – it’s all about giving your best effort, both on and off the tennis court.That was one of the many pieces of wisdom the former world No. 1 passed on to a group of outgoing kids in attendance at the BNP Paribas WTA Finals Singapore presented by SC Global as a part of SportCares, the tournament’s official social cause.

“I want to know that I’ve earned it and know that I’ve given 100%,” said Williams, in Singapore as a singles alternate for the WTA Finals. “I expect a lot from myself, but it’s also a balance. You have to be honest with yourself, tell yourself when you’re doing well and when you can do better.”

Williams was honest with the group, which numbered about 25 kids, age six to 18, who are volunteers with SportCares, an initiative to introduce sport to children who live away from their parents and are considered at-risk. They had a range of questions for the American, from her career in tennis to her favorite sport, favorite food and how she keeps her vegan diet.

“I’m a ‘chegan,'” she joked, referring to herself as a cheating vegan. “I think that if you feel good eating whatever way you want, you should have a balanced diet. As long as you eat healthy, that’s OK.”

Williams was all smiles the kids enjoyed the precious interaction that they had with one of the world’s best tennis players while dressed in WTA Future Stars t-shirts.

“Life is a challenge,” said Williams, who won her 47th WTA singles title in Wuhan just a few weeks ago. “That is the best part because challenges are fun. It’s about loving something and doing it well.”

Williams will leave Singapore over the weekend to head to Zhuhai, China, where she will play in the inaugural at Huajin Securities WTA Elite Trophy Zhuhai.

“My role models were always my sisters,” Williams said of who she looked up to when she was the kids’ age. “I have a lot of support from my family. When I’ve been down, they have always been there for me.”

“Things aren’t always going to go the way that you want to,” Williams, 35, said of facing challenges. “A lot of times it’s not going to happen your way, but life is about dealing with that. I learn so much from my losses; they always make me better. Are you going to get up and keep going? Or are you going to let things take you down? The positive is always better.”

At the end of the question-and-answer session, Williams stayed behind to sign autographs and take photos with the lucky participants who were hopefully inspired to pick up a racquet and in future reap the benefits that the sport of tennis can bring them.