Posted by TennisNews.com on October 31, 2015 in Tennis News 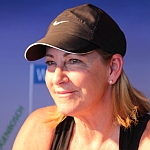 Chris Evert is wondering whether two times Wimbledon champion Petra Kvitova shares the same sort of hunger for success that has pushed Maria Sharapova to three straight victories at the WTA Finals after missing almost four months of the season since Wimbledon.

Sharapova has virtually cruised through to the semi-finals in Singapore, rarely looking a player suffering with the kind of ring-rust. But Kvitova, the WTA champion back in 2011 and a player who by now should have won more than two major titles, has again shown indifferent form after a year where medical issues have again troubled her.

“When I think of the word hunger, I go back and remember myself along with Martina [Navratilova] and Steffi Graf,” said Evert, in Singapore as official ambassador for the WTA Finals.  “Now the only two players that have shown that consistently have been Maria and Serena.

“As for Kvitova? There is a hunger question. I want to ask her: How much do you want it?”

Evert acknowledged the 25 year-old Czech, who this morning faced tennis’ newest female star Garbine Muguruza in a bid to join Sharapova and Agnieszka Radwanska in tomorrow’s semi-finals, has this year faced an ongoing battle with mononucleosis (glandular fever) that first caused her to feel fatigue at the Australian Open and was properly diagnosed after Wimbledon. She has also been troubled by asthma for much of her career.

Mindful of such illnesses, Evert continued: “They have prevented her from playing her best tennis and being in the best shape she can be in, no doubt about it. But if you’re hungry and want it badly enough, you make things happen. You figure it out.

“If it means taking three months off and trying to figure out what’s wrong, you do it and come back with vengeance. Players like Maria, even if all the odds are against them, they figure it out.”