Posted by TennisNews.com on November 12, 2015 in Tournament News 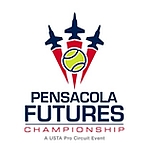 An exciting Wild Card tournament came to a close today with Sebastian Sanchez and Michael Lippens winning and advancing to the Main Draw. Sanchez, originally from Bogota, Colombia, plays at the number four spot for the UWF Men’s Tennis Team. Lippens traveled to Pensacola from West Long Branch, New Jersey to compete for a spot in the Main Draw.

Sanchez defeated Chris Ephron, a local high school tennis player, 6-2 6-1, and Lippens defeated Lynch 6-2 6-2 in the final rounds this morning. The highlight of the tournament, however, was a match between Sanchez and Matt Kandath, former player for the Stanford Cardinals, which occurred in the second round. Sanchez won a nail biting first set 7-6, while Kandath won the second set 6-4. Kandath was up 9-5 in the 10-point tiebreaker, but Sanchez came back to win it 12-10.

The Pensacola Sports Association (PSA), along with Roger Scott Tennis Center, will be hosting the qualifier tournament beginning Friday, November 13 and the Main Draw beginning on Tuesday, November 17. Admission to the tournament is free, or you can find updates on the Pensacola Futures Championship at https://www.facebook.com/PensacolaFutures