Posted by TennisNews.com on December 5, 2015 in Business News 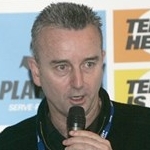 New International Tennis Federation president Dave Haggerty has barely had time to make himself at home in his new office than Dave Miley, the ITF’s Executive Director of Tennis Development for the last 24 years, has decided to leave his post.

Aside from running the Davis and Fed Cups, one of the main roles of the ITF is to spread knowledge and the ability to play tennis around the world and Miley was the mastermind, visiting over 140 countries worldwide.

With Miley’s innovative and creative approach, he played a key role in the development of tennis globally and initiated many successful projects including Tennis10s that grew out of the ITF’s Play and Stay Program.

Haggerty said: “The outstanding work of the ITF’s Development Department and the contributions of Dave Miley are well known throughout the tennis world. He will leave a large legacy and we wish him well for the future.”

And previous ITF president Francesco Ricci Bitti added: “I worked with Dave for the 16 years of my Presidency and before that as a member of the ITF Board of Directors. He has an excellent reputation both in the tennis world and the wider sports community for his innovative projects and energetic approach to Development.”

Miley was integral to the launch of iCoach, the ITF’s official online coaching platform and was also very active throughout his tenure at the ITF with the Worldwide Coaches Conference, with another successful five-day conference held last week in Turkey.

As long ago as 1993, Miley established the ITF Coach Education Program and was author of both the Level One manual and co-author of the Advanced Coaches manual that is now available in over 20 languages worldwide.

The Junior Touring Team program proved very successful with many top-ranked players coming out of the teams, including Grand Slam Champion Victoria Azarenka