Posted by TennisNews.com on December 5, 2015 in Tournament News 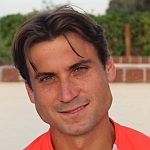 Spanish stalwart David Ferrer will line up next April in the field of the Barcelona Open for the 14th consecutive years. Proud organizers trumpeted the fact, with the four-time finalist at the Real Club de Tenis entered along with eight-time champion and national tennis hero Rafael Nadal.

All four of Ferrer’s defeats in title matches came at the hands of Nadal, the beast of clay. No. 7 Ferrer reached the semi-finals last spring in the Catalan capital, going out to compatriot Pablo Andujar.

“After 13 years I am still as excited to play in Barcelona as the first time. I feel loved by the fans and receive a lot of support there every year,” the newly married Ferrer said. “I feel really good physically and mentally after finishing a great season. I look forward to playing more tennis.”

Ferrer will go into 2016 action at age 34 after winning 2015 trophies in Doha, Rio de Janeiro, Acapulco, Kuala Lumpur and Vienna, running his career total to 26. He remains the third most successful Spanish player in history following Nadal (67) and Manuel Orantes (33).

“Having Ferrer is a privilege for the tournament. It always has been, but looking back on his impressive career, even more so now,” said Barcelona tournament director Albert Costa. “For many people, including myself, he forms an important part of the tournament’s history.

“Ferrer is a player that deserves everything. Only few players have achieved what he did in Barcelona.” Japan’s Kei Nishikori has won the last two tournament editions.