Posted by TennisNews.com on January 2, 2016 in Tournament News 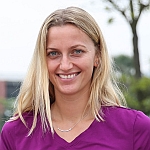 The top two seeds, WTA world no. 5 Agnieszka Radwanska (POL) and WTA world no. 6 Petra Kvitova (CZE), were customarily placed on opposite sides of the draw — potentially setting up an enticing rematch of the 2015 WTA Finals; though Kvitova (CZE) leads their head-to-head 6-3, the evenly-matched players have traded wins in their last four contests, with Radwanska edging Kvitova most recently to claim the year-end championship in Singapore, 6-2, 4-6, 6-3.

Seeded first in Shenzhen, Radwanska will take on Aleksandra Krunic (SRB), who last year capitalized on the momentum she gained in the Shenzhen qualifiers to surge to the quarterfinals of the main draw, before falling to eventual champion Simona Halep (ROU).

Number two seed Kvitova — who already took the court on January 1st with China’s own Grand Slam champion, the now retired Li Na, and 40 Chinese youngsters for the first-ever Li Na Kids’ Day — will return to Center Court to face tenth seed and crowd-favorite Zheng Saisai, the highest seeded Chinese player in the singles. Zheng is no stranger to playing top seeds in Shenzhen, having upset last year’s fourth seed Zarina Diyas (KAZ) to set up a semifinal clash with the 2015 number one seed Halep. Zheng hopes to improve on that straight set loss, where she was ailed by a left hamstring injury she incurred during her three-hour battle with Diyas.

The WTA player representative at the draw ceremony, WTA no. 31 Irina-Camelia Begu (ROU) returned to Shenzhen having been lifted to the third seed by her strong 2015 results (including the title in Seoul); however, luck was not in her favor as the draw pitted her against her best friend, world no. 86 Lara Arruabarrena (ESP) to open play for the main draw at 2016 Shenzhen Open.

Following the Begu-Arruabarrena match, fourth seed Monica Niculescu (ROU) will take on her first-round opponent Anastasija Sevastova (LAT). Niculescu is returning for her fourth Shenzhen Open, and looks to build on her momentum last fall where she won the ITF Poitiers to close out her 2015 campaign.

Bojana Jovanovski (SRB) and Anna-Lena Friedsam (GER) once again drew one another as first-round opponents, setting up a rematch of their 2014 Shenzhen Open first round; then a qualifier, Friedsam upset fourth-seed Jovanovski 6-1, 7-5.

One head-to-head that could challenge the Kvitova-Zheng contest as the most scintillating first-round match is sixth seed Eugenie Bouchard (CAN), the 2014 Wimbledon finalist who arrived three days early to practice in Shenzhen, versus the 19-year old Donna Vekic (CRO), the 2015 Tashkent finalist and one of the most promising teenagers on the WTA Tour.

Looking ahead in the draw, as every player is trained not to do and as every fan delights in doing, the well-balanced draw could lead to tantalizing quarterfinals such as Radwanska vs. Johanna Konta (GBR), Begu vs. seventh seed Diyas, Niculescu and Bouchard (the fourth and sixth seeds, respectively), and Kvitova and Annika Beck (GER), another player who begins her season at the Shenzhen Open every year, the talented youngster achieving her best result here in advancing to the quarters in 2014 with memorable artistry and athleticism reminiscent of a Henin or Hingis.

As far as Tournament Director, IMG Senior Vice President and Head of Tennis, Asia, Nick Freyer, is concerned, the 2015 Shenzhen Open is already off to an illustrious start in its fourth edition.

“Yesterday Shenzhen had the honor of being the first tournament in the world to host Li Na Kids’ Day,” Freyer said. “We had Li Na and Petra Kvitova give so much of their time to inspire so many young kids. You could see and feel the atmosphere in those two hours. The kids were so inspired, and it was so genuine. I’m proud of this. When you can touch people’s lives in a positive way, and when it’s done with a role model like Li Na, who flies here to do it when she has a baby at home, it’s not only an improvement, it’s a tournament hallmark. Every tournament director in the world dreams to do something like that, and we did it in Shenzhen.

As for the tournament competition that still lies ahead, Freyer added, “It’s incredible to have the two finalists from the 2015 WTA Finals in Singapore here. Everything we do here we try to get a little bit better every year. When you’re already at a high level, it gets harder to find that margin for improvement. We’re already in the top ten percent of WTA international series tournaments, and this is only our fourth year. We’re looking forward to continuing to build on the success and positive experiences we’ve created for players and fans alike.”

The order of play for the final rounds of qualifying and the first main draw action of 2016 will be as follows on Sunday January 3, with all courts beginning at 11am:

In the qualifiers:
Stefanie VOEGELE (SUI) vs. ZHANG Kai-Lin (CHN)