Posted by TennisNews.com on January 2, 2016 in Headline, Tournament News 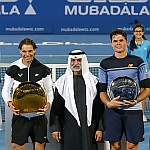 It was jubilation for the Abu Dhabi crowds as Rafael Nadal was crowned king of the Mubadala World Tennis Championship in a victory that could signal the start of a return to the world number five’s best in 2016. Nadal overcame impressive newcomer, Milos Raonic, to win the prestigious Abu Dhabi title for a third year – his first victory here in five years. Zayed Sports City’s International Tennis Centre was packed out with expectant fans ready to see the experienced master of centre court take on a confident debutant who had overcome world number four and reigning French Open champion Stan Wawrinka on his way to the final.

The first set of the night’s showpiece match featured a sublime combination of big hitters from the baseline and perfectly judged drop shots from both sides. A tightly contested first set went with serve to the last, forcing a tie-break that Nadal won 7-2. The second continued in much the same vein until Nadal broke to go 3-1 up. Momentum continued in the Spaniard’s favour and, after a bravely fought battle by the young Canadian Raonic, Nadal eventually claimed victory at 7-6, 6-3.

“It’s a great feeling. It’s a great way to start the new season winning against two of the best players in the world without a doubt, and playing at the right level – I played a good level of tennis and I’m happy for that. I’m happy to win the title here in Abu Dhabi again.  I tried hard every year [to win] but I feel that I arrived in very good shape this year,” said champion Nadal.

Looking ahead to the rest of his 2016 season, the Spaniard added: “I am playing well now, I don’t work to be back, I work to be better than what I was two, three, five months ago. I want to improve my level all the time. I don’t think about what happened five or three years ago, I think about what happened yesterday to improve today. That’s my philosophy. I feel good now. I feel ready for the competition.”

“I hope to be back here soon. The tournament is very well organised and for me it’s a perfect way to start the new season,” he finished.

“It’s been phenomenal. It’s been a premium way to set up 2016. You get three great matches against great players, and it gives you a lot to build off, a lot of insight and hopefully things will keep going well through the first month of the year and maybe I can play Rafa again. I’m happy with the way I played over the weekend, it’s been great for my tennis.”

“It’s been great to see the Canadian flag out every single day, to see people not only at the tennis but around the city. It’s a really positive reaction that I’m grateful for from the Canadian people – to be taking tennis in and to be wanting to be a part of it,” he added.

In the opening match of the final day, Stan Wawrinka took fourth place overall in this year’s Mubadala World Tennis Championship after being bested by Nadal’s compatriot, David Ferrer, in what turned out to be a lucrative night for the Spaniards. It was the hard-working Ferrer who caught the first break of the first set and took it to 5-2 before Wawrinka fought back to force a tie and win the first 7-6. With Ferrer taking the second 6-4, the match went to a super tie break. Fans were on the edge of their seats with Ferrer eventually claiming the win at 10-8.

After his victory over Wawrinka, Ferrer commented: “It was a close match. Maybe in the last points of the tie break I was more aggressive than him and he made two mistakes but he could easily have won the match. It’s been a great tournament, a fantastic chance to play with the top players so I enjoyed it. I think I put in a good performance and I’m ready to go forward in the season.”

The Mubadala World Tennis Championship concluded its eighth edition on January 2nd, 2016. Well established as an annual season-opener, the tournament features six of the world’s best players who battle it out at the International Tennis Centre at Zayed Sports City, Abu Dhabi for the prestigious Championship title – and a winner takes-all prize of $250,000 – over three action packed days. From the very first ball hit on centre court, spectators are treated to the equivalent of a Grand Slam quarter final with the world’s best looking to get their tennis season off to the strongest possible start in Abu Dhabi.