Djokovic May See A Bit Of Himself In Kyrgios

Djokovic May See A Bit Of Himself In Kyrgios
January 18, 2016
Notice: Undefined variable: page_title in /home/tennisne/public_html/wp-content/themes/dante-child/single.php on line 205

Posted by TennisNews.com on January 18, 2016 in Tennis News 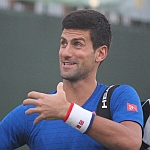 Novak Djokovic may be seeing a bit of his younger self in tear away Aussie Nick Kyrgios, with the world No. 1 Serb offering some quiet advice to the young gun on the rise.

Kyrgios, 20, has drawn more than his share of attention after a controversial 2015, which included disciplinary threats and ATP fines for various outbursts on court. So far in 2016, the No. 30 has kept things quiet, with tennis officials hoping that is the wave of the future for him.

Djokovic was an acquired taste for fans early on in his career and still has yet to achieve the loving public embrace which greets Roger Federer and Rafael Nadal at every appearance on and off court.

But the Serb is a proven winner who believes in the Kyrgios career: “Undoubtedly he has a great potential to be one of the world’s best tennis players and I’m sure that he also has the intention and the ambition to achieve great heights in this sport,” the Serb told The Guardian.

“He still needs that routine and needs a certain level of professionalism and I would say, a kind of a sacrifice, you know, for something that [he wants] to achieve. It’s all about give and take in life.

“It’s important as well to keep the right balance. I don’t think it’s really healthy to just be living and breathing and dreaming tennis but also it’s not good to be on the other extreme of not really caring too much and just going along and seeing how things turn out.

“It’s important to find that optimal zone where you feel comfortable and you find that necessary balance in the middle where you know what works for you the best.”