Djokovic Would Love To Win A Golden Grand Slam In 2016

Djokovic Would Love To Win A Golden Grand Slam In 2016
June 8, 2016
Notice: Undefined variable: page_title in /home/tennisne/public_html/wp-content/themes/dante-child/single.php on line 205 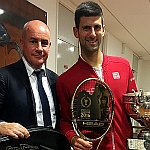 Novak Djokovic would not specifically admit that his sights were now firmly set on achieving the Golden Grand Slam in 2016, winning all four major titles and the Olympic gold medal, but he acknowledged: “I don’t want to sound arrogant, but I really think everything is achievable in life.”

Ever since he was a youngster in his native Serbia, Djokovic has been viewed as something very special. His coach in those formative days, Jelena Gencic, often referred to him as ‘the golden child’ and after he finally completed his collection of major titles by winning the long elusive French Open, the 29 year-old admitted to an almost ethereal out of body experience that took him to the prize.

“I don’t even remember what happened,” said Djokovic of the closing moments of his 3-6, 6-1, 6-2, 6-4 win over second seed Andy Murray. “It’s like my spirit had left my body and I was just observing the last three, four exchanges. Going left to right and hoping that Andy would make a mistake. It was a thrilling moment. One of the most beautiful I have had in my career.”

Djokovic winning run in majors is simply phenomenal; he has now won five of the last six Grand Slam tournaments and broke a losing run in three French Open finals. He will now be the favorite to win a fourth Wimbledon title next month, the third is succession and then comes the quest for Olympic gold in Rio de Janeiro.

“There are not many words that can describe the feeling of holding all four Grand Slam titles at the same time,” said Djokovic whose collection now stands at 12. “It’s one of the ultimate challenges that you have as a tennis player.

“I’m obviously very proud, very thrilled. It’s hard for me to reflect on what has happened before and what’s going to happen after. I’m just so overwhelmed with having this trophy next to me that I’m just trying to enjoy this moment.

“A lot has been going on in my mind ever since I arrived in Paris but I felt like this year, when I arrived, that it’s really different from any other year.”

Murray was clearly devastated at suffering another final defeat to his career long rival but was magnanimous in defeat and praised Djokovic’s accomplishment.

“This is Novak’s day, what he has achieved in the last 12 months by winning all four of the grand slams is phenomenal,” said the Scot. “It’s an amazing achievement, this is something very rare in tennis.

“Winning all four slams is something that is so rare in tennis. It’s not happened for an extremely long time and it will take a long time for it to happen again. Being on the opposite side of the net, it simply sucks to lose the match. But I’m proud to have been a part of it today.”